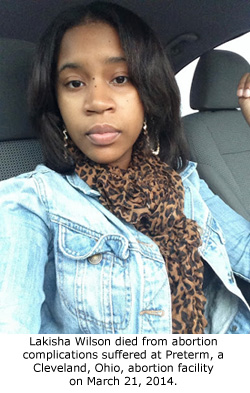 Cleveland, OH (March 5, 2015) – When Lakisha Wilson walked into Cleveland’s Preterm abortion clinic a year ago, she never dreamed it would be the last thing she ever did.

Now, an NPR article published on March 3, 2015, is taking the side of those who are responsible for Wilson’s abortion-related death in bemoaning the enactment abortion laws in Ohio that were meant to spare women like Wilson from landing on a cold slab in the morgue.

“Abortion clinics in Ohio need more oversight, not less, and Wilson’s tragic death proves it,” said Troy Newman President of Operation Rescue. “Not only were Ohio’s abortion laws inadequate to save Wilson’s life, but failures in regulatory enforcement continue to put other women’s lives at risk as well.”

But one would not understand that reading the NPR report that interviewed Preterm’s executive director, Chrisse France, who bemoans the fact that hers is one of two remaining abortion clinics in the Cleveland area since laws requiring abortion clinics to be licensed and meet minimum safety requirements shut down half the abortion businesses in Ohio.

“We are more fully booked, and I think we have a harder time squeezing patients in if they’re earlier in the pregnancy,” France told NPR, noting that business is up at her clinic by 10 percent since most of her competitors closed. 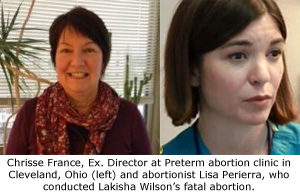 Perhaps France is having a harder time “squeezing in” early-term patients because she can make more money targeting poor urban women of color like Lakisha Wilson, for more lucrative abortions in the later stages of pregnancy.

France continued to complain about the expense and inconvenience for women that Ohio’s 24-hour waiting period poses. However, the later abortions for which France seems eager to clear her appointment calendar, usually require overnight stays and are far more costly – and dangerous — than the early term abortions she says she can’t fit in.

The dichotomy of complaining about abortion access while denying access to less expensive and (supposedly) safer early abortions wasn’t lost.

Preterm abortionist Lisa Perierra was responsible for Wilson’s abortion. Unsurprisingly, during her interview with NPR Wilson’s name never came up.

Instead, Perierra complained about Ohio’s “confusing” requirement that viability tests be performed on pre-born babies 20 weeks gestation or older.

“The laws say that we have to do some kind of testing,” Perierra griped to NPR. “They don’t tell us what kind of tests to do, nor do those tests even really mean anything. It’s just another hoop to jump through.”

So instead, Preterm abortionists just made up their own test, reportedly based on fetal age and weight.

But evidence obtained by Operation Rescue indicates that Preterm actually may be falsifying fetal ages to avoid having to conduct their spurious viability tests.

Documents in Operation Rescue’s possession indicate that in the case of Lakisha Wilson, ultrasound images and measurements of her baby produced at Preterm dramatically contradicted both a previous ultrasound taken at another facility and the date of her last menstrual period (LMP).

Records show that Wilson received an ultrasound at a facility in Columbus, Ohio, on February 27, 2014, showing Wilson’s baby to be 18 weeks 4 days of age. However, that notation on her Preterm records appeared to have originally been 19.4 weeks, with the 9 being marked over to appear as an 8.

“There is a huge discrepancy between 19 weeks and 23 weeks,” said Newman. “One would think that given the previous ultrasound results and Wilson’s LMP, a closer examination would have been done.”

A fetal viability test, required at 20 weeks and later, was never done by Perierra or anyone else at Preterm.

The NPR article also quotes Kellie Copeland of NARAL Pro Choice Ohio, whose office resides on the fourth floor of the Preterm clinic, located at 12000 Shaker Boulevard in Cleveland. Perhaps Copeland was even present that fateful day last March when Lakisha Wilson was wheeled out of Preterm to an awaiting ambulance.

That would certainly make her comments to NPR all the more appalling.

“At no time in history, nowhere around the globe did outlawing abortion mean women stopped having them,” Copeland opines. “What it meant is they became dangerous.”

Not that any abortion could be more dangerous than Wilson’s, which left her 2-year old son motherless.

According to official documents, including abortion records, EMT notes, hospital charts, an autopsy report, and 911 records all in Operation Rescue’s possession, Wilson began to hemorrhage during her abortion on March 21 and her blood pressure began to drop. Instead of stopping the abortion and tending to her patient, Perierra continued the abortion until Wilson went into hemorrhagic shock, suffered cardiac arrest, and stopped breathing.

Records indicate that the abortion began at 10:31 a.m. and that her blood pressure began to drop dramatically eight minutes into the procedure. By 10:50, Wilson suffered cardiac arrest and stopped breathing. CPR was started and she was shocked once, but those efforts were not successful at restarting her heart or respiration. Nine minutes later, a 911 call for help was placed.

Emergency 911 records show that Wilson still wasn’t breathing at 10:59 a.m., the official time the call was made.

Further notations made by EMS indicated that responders were delayed in reaching the patient due to a malfunctioning elevator.

Preterm operates five procedure rooms – all on the third floor of their facility. The only way for a gurney to access that floor is through the use of a small elevator.

When EMTs finally reached Wilson, they noted that she was still lying on the abortion table with her legs in the stirrups while staff members futilely continued CPR on Wilson’s lifeless body. EMTs removed the pediatric-sized oxygen mask that Pererria had used on Wilson, and replaced it with an adult-sized one.

Adding to Wilson’s abortion nightmare was the fact that they gurney would not fit into Preterm’s sporadically-functioning elevator in the flat, supine position. This meant that EMTs could not intubate Wilson to fully open her airways when they finally got to her, because that procedure required Wilson to be lying flat. Instead, she had to be placed on the gurney in the seated position, transported to the first floor inside the cramped elevator, then rushed to the ambulance – all before could be intubated.

Compounding the tragedy of this untenable situation, 911 documentation from a previous medical emergency at Preterm on March 31, 2012, indicates that emergency help was delayed for a patient weighing approximately 300 pounds who hemorrhaged during an abortion. Because the elevator was broken, extra help had to be called and emergency responders had to carry her down three flights of stairs.

“It is clear that the Ohio Department of Health was aware of the serious hazards posed by Preterm’s elevator that is far too small and far too undependable. The fact that the Department of Health has repeatedly ignored this danger represents a regulatory failure. Women are literally gambling their lives on whether or not that elevator will work, and no one should have to be put into that situation. The Department of Health simply hadn’t done it’s job where Preterm is concerned,” said Newman.

Yet, the NPR article places more emphasis on how closures will lead to unsafe abortions, than on the fact that Ohio abortion clinics are already unsafe.

“My biggest concern is that there’s going to be a young woman who dies from trying to self-abort,” said Jennifer Branch a pro-abortion civil rights attorney from Cincinnati, who was addressing her fears about what might happen if more abortion clinic close. “And that’s what it’s going to take to galvanize people.”

Apparently, Branch considers Wilson’s death by “legal” abortion at an under-accountable Ohio abortion facility something to be ignored.

“Ms. Branch’s comments are a cruel insult to Lakisha Wilson’s grieving family and she owes them an apology for treating them as if the loss of their loved one was meaningless. If she really cared about the lives of women, she would join us in trying to shut down Preterm’s deadly abortion operation,’ said Newman.

The death of Lakisha Wilson is a stunning indictment of the abortion lobby in Ohio, who feign concern for the lives of women but actively deny responsibility or even cover it up when women die at their own shoddy facilities.

And what of the death of Lakisha Wilson? Did the loss of this 22-year old woman “galvanize” the public to demand change that will protect vulnerable pregnant women from exploitation at the hands of the abortion cartel?

The Ohio Medical Board was the first to declare that no patient care standards were breached. Then came the Ohio Department of Health, which claimed that all complaints concerning Wilson’s deaths were unfounded. Now comes the silence of the State Attorney’s office that doesn’t seem to think that Black lives matter – at least not those lost at Ohio’s abortion clinics. So far, Cuyahoga County Prosecutor Timothy McGinty has refused to even investigate Wilson’s death as requested by national and state pro-life leaders.

Mike Gonidakis of Ohio Right to Life told NPR that his group has been successful at pushing forward pro-life legislation “because he doesn’t push too far.”

“While we appreciate Ohio Right to Life and the pro-life laws that are on the books in Ohio, we have to push harder to make sure that women like Lakisha Wilson and her viable baby don’t continue to die from unsafe abortions and regulatory apathy,” Newman continued, “As long as women and their babies are at risk at Ohio’s abortion clinics, we must press hard with abandon for laws and even prosecutions that will put these abusers out of business.”

In a sad post script, abortion forms obtained by Operation Rescue show that Wilson experienced a range of emotions prior to her tragic abortion. She felt confident and relieved by her decision, but also ashamed.

When asked, “What are your thoughts today about ending this pregnancy?” Wilson replied prophetically, “Last time.”

Too bad NPR didn’t include Wilson’s death from abortion in its story. Perhaps then more would understand that the truth of the matter: when abortion clinics are under-regulated or when abortion laws are not enforced, women like Lakisha Wilson die. There is a desperate need for abortion laws, accountability, and aggressive enforcement in order to save their lives and those of their babies.