You are here: Home / Archives for New York

By Cheryl Sullenger Manhattan, NY – Two New York Fire Department ambulances and a fire unit responded to a medical emergency at Planned Parenthood’s troubled Manhattan abortion facility on March 16, 2022. A woman who was participating in a 40 Days for Life prayer vigil outside the abortion facility provided Operation Rescue with her […] 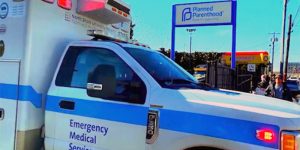 By Cheryl Sullenger Hempstead, NY — The Planned Parenthood abortion facility in Hempstead, New York, was involved in two medical emergencies last month.  The first took place on February 11, 2022, with the second one just six days later on February 17. During the first incident, which appeared to the the more serious of the […]

September 15, 2021: An ambulance waits at the Mott Street entrance of the Manhattan Planned Parenthood where an abortion-related medical emergency was in progress. By Cheryl Sullenger New York, NY – On a narrow yet bustling, tree-lined street in the Noho district of Manhattan, there stands an historic brick high-rise building that seems to blend […]

By Cheryl Sullenger Manhattan, NY – For the fifth time this year, a woman who was a client of the Manhattan Planned Parenthood abortion facility was transported by ambulance to a hospital emergency room.  This is the 38th such medical emergency documented by Operation Rescue with the help of local pro-life activists. The incident occurred […]

By Cheryl Sullenger New York, NY – As shouting New Yorkers began to take to the street where cars were honking in celebration of the news media’s premature announcement that pro-abortion Democrat Joe Biden was projected to win the Presidency, a young woman, who was apparently injured during an abortion, was removed by emergency workers […]