You are here: Home / Abortionist Left Woman to Die in a Pool of Blood

Santa Ana, CA (Nov. 5, 2013)– Angela P. was twenty weeks pregnant when she walked into a dingy abortion clinic in Santa Ana, California, on August 7, 2004. Her abortion was completed in five minutes with little or no pain relief by an 84-year old abortionist, Phillip Rand, who rotated his time between several clinics throughout Southern California. 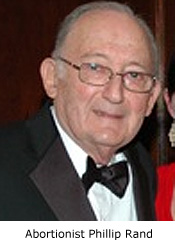 When he was done with Angela’s abortion, he got in his car and began the three-hour drive on congested California freeways to another abortion clinic in Chula Vista, near the Mexican border, where he had more patients waiting. But when Angela started bleeding heavily, the two medical aids, who were the only ones left in the clinic, didn’t know what to do. One called Rand and asked him to return to the clinic to help the hemorrhaging women, but Rand refused. He was already an hour or so away and didn’t want to go back and risk losing business in Chula Vista. He told them to call 911 if she got any worse.

Angela did get worse – much worse. By the time paramedics arrived, it was too late. They found her in a pool of her own blood. There was no oxygen or no crash cart at the clinic, but it is doubtful that the two minimally-trained aids would have known how to operate them if they had been available. Angela was transported to a local hospital where she later died.

One paramedic was so incensed by how he found Angela that he reported Rand to his supervisor who, in turn, notified the Medical Board. A signed declaration from the paramedic noted, “This was the worst post-partum patient situation at a medical clinic I have ever encountered during my time as a paramedic.”

For Angela, there was no continuity of care. Rand held no hospital privileges. This allowed him to operate well below the standard of care at the cost of at least one woman’s life.

Rand “peacefully” passed away in 2015. His obituary noted that he delivered 40,000 babies, but there was no mention of the tens of thousands of babies he brutally killed in his abortion career. Nor was there any mention of the fact that he took the life of Angela P. and got away with it.

[This article has been edited for this format. The full article originally appeared in print on November 5, 2013.]