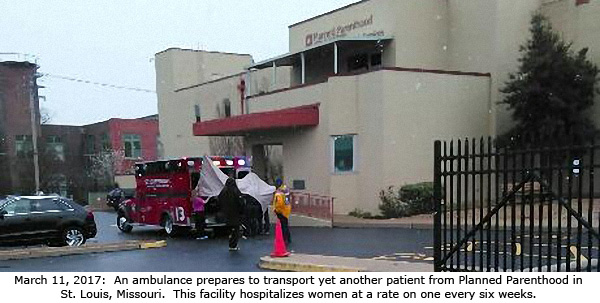 St. Louis, MO – The most dangerous abortion facility in America has transported its 64th known patient by ambulance to a local hospital on March 11, 2017.

The high-volume Planned Parenthood in St. Louis, the only abortion facility in Missouri, has a dismal abortion safety record. Fire Department Records and eye-witness accounts show that it uses emergency ambulance transports for patients on average of once every six weeks dating back as far as 2009.

One witness to the most recent March 11 incident told Operation Rescue that lights and sirens announced the ambulance’s arrival at Planned Parenthood around noon. Ten minutes later-paramedics emerged from the abortion facility with a woman on a gurney that was completely “cloaked” while clinic workers deployed tan tarps to prevent pro-life activists from documenting the incident. It left without running lights and sirens.

But as troubling as the flood of patient injuries have been, a lack of basic sanitation also poses a serious health issue at the St. Louis Planned Parenthood facility. In January, Operation Rescue reported on five Statement of Deficiency Reports that showed Missouri state inspectors have cited the Planned Parenthood abortion facility in St. Louis for 39 classes of violations involving 210 incidents – 53% (111) of which were related to failure to provide a safe and sanitary environment. [Read the full report.]

Those Deficiency Reports indicated that from 2013 through 2016, the violations at the St. Louis Planned Parenthood abortion facility have become more numerous and serious, including failure to properly clean the facility or properly sterilize surgical instruments used on patients.

“We are seeing increasingly deteriorating facility conditions, infection control practices, and patient safety issues. I can imagine no other business that would be allowed to endanger the lives and health of its customers to the extent that this Planned Parenthood abortion mill has,” said Troy Newman, President of Operation Rescue.

Despite its inability to keep its abortion patients out of the emergency room, Planned Parenthood has sued Missouri with the intent of disposing of important abortion safety laws so it can expand its shoddy services into other Missouri communities.

“Planned Parenthood’s arrogance and attitude that they are above the law in Missouri is contributing to the gross patient dangers in St. Louis,” said Newman. “They act as though abortion laws and patient care standards are for others to follow while the Department of Health looks the other way. This allows Planned Parenthood to continually cut corners on safety and sanitation without fear of any meaningful consequences. People that really care about women don’t callously disrespect, exploit, and endanger them like this.”

Please contact your Congressman and Senators and demand that they immediately defund Planned Parenthood.

Sample note to your elected representatives:

“Planned Parenthood facilities across America engage in shoddy medical practices as evidenced by a long list of documented medical emergencies there. [Watch video at https://youtu.be/r19sW5VBA-U ]. Since Planned Parenthood can’t keep their patients out of the emergency room, they don’t deserve to be rewarded with our tax money. Please defund Planned Parenthood now.”