Yesterday [October 15, 2012] Pro-lifers in California posted these images at the Family Planning abortion clinic in Bakersfield:

“Minutes ago a Hispanic woman being transported from abortion chamber…pray for her, repentance and healing!” 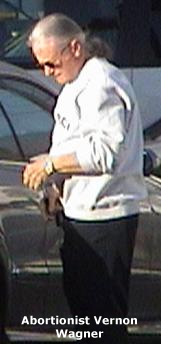 “Police on way to FPA abortion chamber…As abortionist was leaving, I said, ‘So did you botched another abortion along with killing all these babies?’ He started swearing and screaming at me as he quickly approached me, ‘You don’t know what the ….. you are talking about, b……!’”

“I replied, ‘I know you are killing babies and have botched abortions!’ [Vernon] Wagner, still approaching me as I stayed on the public sidewalk yells, “Get the f… out of my face!” He jumps down from parking lot and I thought he was coming to punch me, but he went to our crosses and started pitching them in the street! All the while screaming swear words!”

That was not the first time a woman at the abortion clinic was at risk. In August of 2012, LifeSavers Ministries witnessed another ambulance arriving. Here is their account:

An ambulance arrived Monday morning at the FPA abortion center in Bakersfield, as abortionist Vernon Wagner continued aborting babies inside. After a few minutes, the door to the abortion room opened, and a young black woman was taken out on a stretcher. The ambulance transported the woman to the Kern Medical Center emergency room. No further information about the woman’s condition is available at this time.

The presence of the ambulance was a somber reminder of the dangers of “legal” abortion to women. Just a few weeks ago, Tonya Reaves bled to death after her baby was aborted in a Chicago Planned Parenthood.

According to 40 Days for Life: Wagner is not only responsible for the deaths of thousands of babies; he has also been sued for the death of Tami Suematsu. Her family accused Wagner of gross negligence for finishing his other abortions while she lay dying. Life Dynamics describes her death this way: Tami, who had a history of asthma, underwent an abortion at Riverside Family Planning Center on August 19, 1988 in Riverside, California. After the surgery, she went into an asthma attack that led to respiratory failure, which resulted in cardiac arrest. She was transported to a local hospital and died shortly after arriving. She was 19 years old. (Riverside County (CA) Death Certificate No. 38833005990; Riverside County (CA) Autopsy File No. 64442; State of California Certificate of Death # 149559)