You are here: Home / Blowing the Whistle: How one abortion worker allowed the truth to set her free–and put an abortionist behind bars

Kim Nichols was working for Women’s Health Center, an abortion clinic in Hyannis, Massachusetts, operated by Rapin Osathanondh on that fateful day, September 13, 2007, when Laura Hope Smith came to the clinic for an abortion. This is Kim’s story, as she told it to Laura’s mother, Eileen Smith. In it, Kim shares her experiences with Osathanondh in order to encourage other clinic workers to come forward and tell the truth about abortion abuses they have witnessed. Because Kim’s testimony led to the arrest, conviction, and incarceration of Osathanondh, she has been awarded the first Abortion Whistleblower’s Reward of $25,000.

Written by Eileen Smith as told by Kim Nichols
January 20, 2011 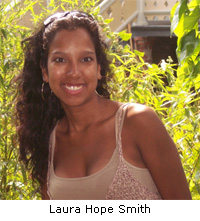 I came to work at the abortion clinic about 10 yrs ago. I had accompanied a friend to the clinic and was bothered by all the young girls there alone in the waiting room. Many were upset and I thought I could help by volunteering. I was turned down at the time but later I was called when a job opened up.

One of the first things the doctor did was warn me about the Pregnancy Care Center (A Woman’s Concern) next door. He told me they were evil people and they lied to the girls to keep them from getting abortions. He also told this to his clients and other employees. I believed everything he said at that time because he was a retired doctor from Harvard’s teaching hospital and doctors don’t lie, right?

But the longer I worked there, the more I saw. His treatment of the patients and employees alike was very bad. Many girls quit working for him because of the abuse. Some of those who quit were RN’s who, unlike me, realized how far from medical standards he strayed. When he was asked about these things, he would say things like “Because I am the doctor and this is what I say to do,” or “You are NOT in Brigham and Women’s anymore, we do things differently here!”

I didn’t know it at the time that he had to leave Brigham & Women’s Hospital for threatening to kill 5 of his nurses for losing some paperwork. The nurses were so upset they called the police on him. (Some say he was fired, he says he resigned.) That is when the doctor came to Hyannis and reopened up a previously closed abortion clinic.

Women came from all over to get abortions in Hyannis. Planned Parenthood sent many referrals not only from Boston, but from Maine, New Hampshire, and Rhode Island. They looked very far along in their pregnancies and I had to wonder why they came so far to us, passing many abortion clinics on the way to Hyannis. (Eileen wonders if he could he have possibly been doing late term abortions.)

The doctor would only accept cash up front for his abortions, no checks, no credit cards and no insurance. He would charge from $500 to $900 depending how far along the girls were. 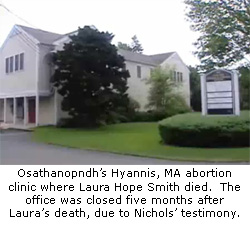 I initially went to work at the clinic thinking I was doing a good thing for the girls. That paradigm all came crashing down the day Laura Hope Smith died while I was holding her hand during her abortion. Her final words to me were “I am so glad you are here with me, I feel so safe.”

Laura’s death shook me to my core. I told the doctor that we should close this clinic down. This wasn’t supposed to happen.

He told me to take a vacation and paid me to do it, this is something he never did before. I spent two weeks in Florida and came home only feeling worse about everything.

I was told Mrs. Smith got a lawyer and we were all in trouble. The doctor said we all need to get together and agree what had happened. I told him I couldn’t lie for him. He said, “Don’t lie, just say you don’t remember anything…that you were in shock. “ He told me I would lose my house in the lawsuit if I didn’t go along with him and his lawyers. Still I refused to lie for him. I had to get my own lawyer, which I couldn’t afford, because I wasn’t going to lie and help him cover up Laura’s death.

The doctor began a series of harassing phone calls to me and my husband trying to get me on board with his lies. He begged me, told me I was going to hurt everyone, the employees who would lose their jobs, the girls who would have no place to get an abortion, and most of all, he said I would hurt myself and my family when we lost our home in the lawsuit. I naively believed that he was telling me the truth, but even so, I could not lie for him. If I would lose everything then so be it; right is still right.

One day, Mrs. Smith contacted me and I was relieved. I told her the whole story about what happened to her daughter, and she encouraged me come forward and tell the truth to the authorities, which I gladly did.

When I was interviewed by the Massachusetts Board of Medicine, I told them everything that happened the day Laura died and on the subsequent days of the great cover-up, which he began in order to hide the real reason for Laura’s death. Apparently when I told them the truth about what happened, it was the opposite of what the doctor had told them. They subsequently declared him a danger to public safety. That edict closed the abortion clinic on that same day, Feb 20, 2008, five months after Laura’s death. Upon hearing that the Board had filed a petition against him, the doctor chose to resign his license permanently rather than go through a medical board trial. He can no longer practice medicine anywhere in this country. He was later convicted of manslaughter and sent to jail.

Before Laura’s death I would have considered myself Pro-choice. Now, I am definitely Pro-Life! I want to tell all those young girls who are contemplating abortion to reconsider. I want to tell them that abortion will affect them for the rest of their lives and that that it may even sterilize them. I want them to know that they can be physically maimed or worse; they could die, like Laura did.

I now see that girls are traumatized by abortion. They are not told what is really going to happen to them or their babies. They are lied to about the development of the baby. The baby is called a blob of tissue. They are not told about the alternatives to abortion such as adoption. I wish abortion would end.

One day I would like to volunteer at a pro-life pregnancy care center. I want to share my experiences with the young girls and hopefully help them change their minds regarding abortion.

I will never forget Laura Hope Smith, whose life was snuffed out along with her child, as I stood there holding her hand, thinking I was helping her!