You are here: Home / Abortion911 / Carhart Sends 10th Patient to Hospital on Anniversary of Another Patient’s Death

This is the 10th time Carhart has summoned an ambulance to transport one of his patients to the emergency room since he first began working at Germantown Reproductive Health Services (GRHS) in December 2010.

Video provided to Operation Rescue by the Maryland Coalition for Life showed the ambulance arrived at GRHS at 3:05 p.m. About five minutes later, paramedics wheeled out a woman who was sitting upright on the gurney. 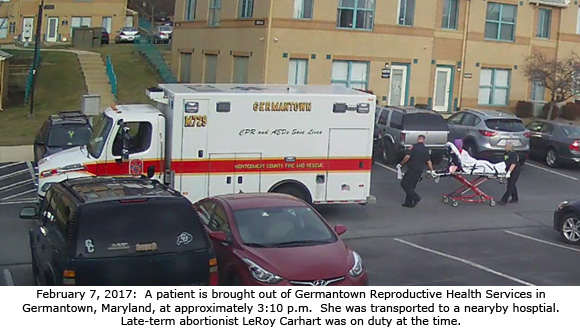 “Medical emergencies are increasing in frequency at Germantown Reproductive Health Services. This is an alarming and dangerous trend that must be investigated,” said Troy Newman, President of Operation Rescue.

The Maryland Board of Physicians is currently refusing to investigate Carhart’s patient care issues unless they are provided with the name and contact information of an abortion patient that suffered injuries at GRHS.

“Unfortunately, the Board completely understands that patient identities are protected by HIPAA, so it would be very difficult for pro-life supporters who witness these emergencies to have access to that information,” said Newman. “It’s a roadblock the Board knows we will have difficulty overcoming. This only protects Carhart so he can kill and maim again and again without consequence.”

The last time an ambulance was called to GRHS was April 4, 2016, when a hemorrhaging late-term abortion patient was rushed to the hospital.

Carhart reportedly quit his job with GRHS in October 2016 while under Congressional Investigation and fighting a major malpractice suit. Carhart returned to work at GRHS about two months later.

Since Carhart’s return, two late-term abortion patients have been forced to return to the abortion facility in the middle of the night suffering unscheduled problems. One woman was pictured waddling into the facility with what appeared to be a plastic shower liner between her legs.

The House Select Investigative Panel on Infant Lives’ final report noted that Carhart apparently has health issues, including arthritis so severe in his hands that one former worker told the Panel that Carhart was not physically fit to conduct abortions.

The most recent incident occurred four years to the day after Jennifer Morbelli died from complications to a 33-week abortion. As her condition deteriorated overnight after her abortion, neither Carhart nor his staff could be reached. Her family eventually took her to a nearby emergency room where she later died.