You are here: Home / Morbelli Autopsy Report Does Not Address Carhart’s Abandonment of Abortion Patient 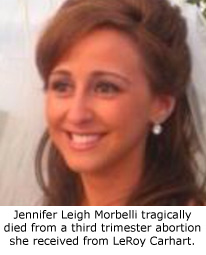 Germantown, Maryland (May 20, 2013) – The autopsy report of Jennifer Morbelli, the 29-year old woman who died from complications to a 33-week abortion in February, was released yesterday by the Maryland Office of the Chief Medical Examiner, who attempted to whitewash LeRoy Carhart’s responsibility for Morbelli’s death.

The Medical Examiner’s findings are in keeping with the cause of death released earlier and recorded on her death certificate, which was obtained by Operation Rescue. That cause of death was listed as Disseminated Intravascular Coagulation “due to or as a consequence of Amniotic Fluid Embolism following Medical Termination of Pregnancy,” making it clear that the abortion was the event that led to her death.

The report emphasized that the complication occurred after the dangerous late-late term abortion was completed, and reiterated that the manner of death was “natural” even though she would not have died had she not receive the abortion.

“Some have seized on the word ‘natural’ as the manner of death, but that only means that it wasn’t a homicide or suicide. It certainly does not rule out physician incompetence and negligence,” said Operation Rescue president Troy Newman.

Operation Rescue staff currently have an open complaint against Carhart with the Maryland Board of Physicians. The MDBP confirmed earlier this week that Carhart is still under investigation in the Morbelli death, which means he could still face discipline up to and including license revocation.

“When abortionists fail to provide continuity of care, women die,” said Newman. “There is no doubt that Carhart abandoned his patient after the abortion, and that is a serious issue of negligence that must be addressed before yet another woman dies at his hands.”

Witnesses at the Germantown abortion clinic where Carhart conducted the late-term abortion on Morbelli said that she appeared “weak and pale” as the multi-day procedure progressed. They also report that she spent more time in the clinic than patients usually do, and noted that they saw Carhart leaving the clinic with his suitcases just minutes after Morbelli left on the final day of the abortion.

Another witness at the hospital told Operation Rescue that as Morbelli’s condition deteriorated in the hours after the abortion, efforts by the family to reach Carhart for emergency instructions were futile. Out of desperation, the family finally took Morbelli to Shady Grove Adventist Hospital where emergency room staff also attempted to reach Carhart and the clinic staff, again to no avail. That left the hospital physicians in the dark about her condition and prior medical treatment, causing a delay in providing the care she needed. As a result, Morbelli died.

“The national media seems to be in a rush to clear Carhart, but if his responsibility for neglecting Morbelli is swept under the rug, it is only going to place the lives of women in continued danger from fly-by-night abortionists who drop into town, do their dirty work, then fly out, leaving others to clean up their messes,” said Newman.

News reports have repeatedly attempted to whitewash Carhart’s involvement in Morbelli’s death, especially after a criminal investigation was closed last week and the Health Department declared that it found “no deficiencies” at the Germantown Reproductive Health Services abortion clinic related to Morbelli’s death, even though serious deficiencies were in fact documented, including a lack of emergency plan.

“It’s important to note that Carhart has not been cleared of culpability in Morbelli’s death,” Newman continued. “Carhart was involved in a second third-trimester abortion death in Kansas, for which he escaped responsibility, which makes the Morbelli death even more tragic, and the need to bring him to justice more urgent.”