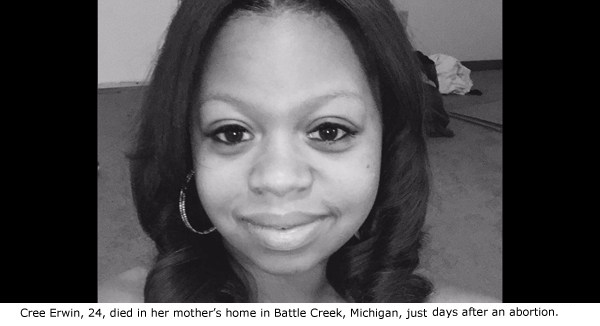 Kalamazoo, MI (March 14, 2017) – The death of a young mother, Cree Erwin-Sheppard, just three days after receiving a surgical abortion at a Planned Parenthood facility in Kalamazoo, Michigan, has turned into a mystery worthy of the fictional Sherlock Holmes. Questions of why she died and who was responsible remain covered up under heavy redactions in her recently released autopsy report.

After a delay of over eight months, the Calhoun County Medical Examiner’s autopsy report is filled with strategic redactions that obscure the most pertinent parts of the report, including most of the cause of death determination. 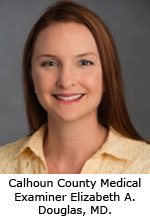 In fact, just reading the redacted autopsy report, submitted by Elizabeth A. Douglas, MD, one would never know that an abortion was involved, much less Planned Parenthood.

While important information in the autopsy report was blacked out to remove any mention of an abortion, the toxicology reports noting trace amounts of Methadone and other pain/anti-convulsant drugs was left completely unredacted.

“It is my opinion that there is an effort on the part of the Calhoun County Medical Examiner’s office to protect Planned Parenthood while wrongly blaming Erwin-Sheppard for her own death,” said Troy Newman, President of Operation Rescue. “The way the autopsy report is censored, it falsely leads one to believe that unprescribed drugs caused her death, while the fact that her uterus was perforated is completely expunged from the record. Planned Parenthood corruption appears to have infiltrated the Medical Examiner’s office.”

If it was not for other bits of documentation obtained by Operation Rescue and its team, the cause of Cree Erwin-Sheppard’s death would be a complete mystery. 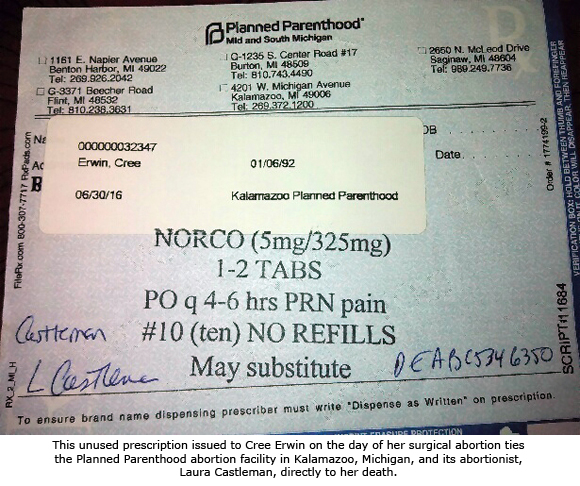 Operation Rescue partnered with long-time Michigan pro-life activist Lynn Mills to get to the bottom of what really caused the death of this young mother. Mills obtained Erwin-Sheppard’s unredacted death certificate that shows the full cause of death, much of which was omitted from the autopsy report. Yet, even that document contributes its own mysteries.

The manner of Erwin-Sheppard’s death was listed as “Accident,” although that does not rule out negligence. The determination of “Accidental” death is the default setting for coroners who examine abortion death cases. Most never look further into conditions and practices at the abortion facilities that may have contributed to the death.

[Redactions to this document were done by Operation Rescue.]

The cause of death listed on Cree Erwin-Sheppard’s amended death certificate is as follows:

The autopsy report noted the only area of vein clotting in Erwin-Sheppard’s body was found in the uterine vein. This lends itself to the conclusion that trauma to the vein caused the clots, which later broke away and traveled to her lungs.

The only source of trauma or injury in Cree’s body was the uterine perforation, which could well have resulted in damage to her uterine vein. 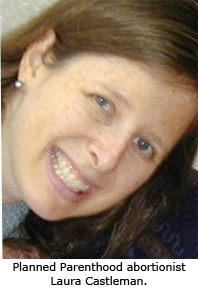 To further muddy the waters, in Box 41c of the death certificate, the medical examiner is asked to “Describe how the injury occurred.” The puzzling answer? “Use of unprescribed drugs.”

“That answer is completely ridiculous,” said Newman. “Drugs don’t cause the uterus to put a hole in itself. It’s hard to believe this is the best the medical examiner could come up with after eight months.”

The death certificate also contains other inconsistencies. Methadone use is noted in a box that asks for “Other significant conditions contributing to death but not resulting in the underlying cause given in Part 1.”

If the methadone did not result in the underlying cause of death, why is it listed as the “injury” that led to Erwin-Sheppard’s death?

Based on the information available at this time, it is logical to reach the following conclusions:

1. Cree Erwin-Sheppard received a surgical suction aspiration abortion on June 30, 2016, at Planned Parenthood in Kalamazoo, Michigan.
2. During that abortion or subsequent IUD insertion, her uterus was perforated and her uterine artery was injured.
3. On July 2, suffering from intense abdominal pain, Erwin-Sheppard was taken by her mother to Bronson Battle Creek Hospital’s emergency room, according to a police report. There, Cree was supposedly given pain medication and told to see her family physician the next day.
4. In so much pain that she was afraid to go home, Erwin-Sheppard was taken to her mother’s house and put to bed. She slept through the day.
5. While at her mother’s home and desperate to ease the pain, Cree somehow accessed a dose of methadone.
6. In the early morning hours of July 4, 2016, Erwin-Sheppard’s mother found her daughter dead in her bed.
7. An autopsy was performed by Elizabeth A. Douglas, MD, on July 4, 2016 at 8:25 a.m. A uterine perforation was discovered. Blood clots were found in her uterine artery and lungs, which caused her death. Blood and urine was sent for toxicology screening.
8. When the autopsy was finally released on March 9, 2017, all mention of the abortion, uterine perforation, and IUD insertion were redacted along with the salient portions of the cause of death while other sensitive information was left intact.

“This autopsy report and inconsistent entries in the death certificate just don’t pass the smell test,” said Newman. “It is more than a little suspicious that the one that benefits from the cover up of information is Planned Parenthood. Politics and personal ideology have no place in the investigation of Cree’s death. A full and honest investigation must be conducted by the Michigan medical board to determine who is responsible for this abortion-related death before tragedy strikes another Planned Parenthood patient.”

This is a mystery that deserves to be solved for the sake of other women who may seek services at Planned Parenthood’s Kalamazoo office. Operation Rescue will continue to seek transparency and justice on behalf of Cree Erwin-Sheppard and her family until those responsible for her needless death are brought to justice.

[All redactions in this document were done by the Calhoun County Medical Examiner’s Office.]

To learn more about the death of Cree Erwin, please visit OperationRescue.org.