Cincinnati, OH – Planned Parenthood’s Cincinnati abortion clinic has dumped an epileptic patient suffering a medical emergency on a hospital that refused to grant it a hospital transfer agreement.

Emergency 911 records obtained by Operation Rescue related to a February 20, 2015, incident indicate that a 38-year old pregnant patient suffered seizures and was unresponsive. 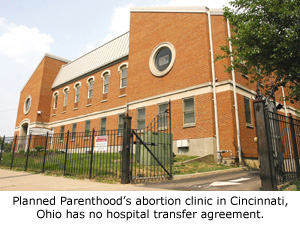 The Planned Parenthood worker at first told the 911 dispatcher that the woman had no history of seizures, then corrected herself and indicated the patient had a medical history of seizures and suffered an episode just four months prior.

The patient was transported by ambulance to a nearby hospital for which Planned Parenthood holds no valid transfer agreement.

Last year, the Ohio Department of Health sent Planned Parenthood a letter noting that because it failed to produce a hospital transfer agreement, it did not meet the requirements for licensing under Ohio law. It informed the abortion facility of its intent to deny licensure, which would have forced Planned Parenthood to shut down their Cincinnati clinic.

No hospital in the Cincinnati area would grant a transfer agreement to Planned Parenthood’s abortion business.

Planned Parenthood sued the state to challenge the Constitutionality of the hospital transfer requirement, but later withdrew the suit after the Ohio Department of Health relented and issued a license even though they remained in non-compliance.

Instead, Planned Parenthood operates under a variance in which it has an agreement with three other physicians to provide emergency care to it patients suffering live-threatening conditions or complications. However, the physicians named in the variance, David Schwartz and Michael Drasnik have long histories of malpractice and negligence.

“Planned Parenthood operates a facility in Cincinnati that is ill-equipped to handle medical emergencies, making it an act of negligence to even consider treating high-risk patients like epileptics, especially without a valid transfer agreement in place,” said Operation Rescue President Troy Newman. “It is irresponsible for Planned Parenthood to continue to risk women’s lives.”

Planned Parenthood’s Medical Director is Timothy Scott Kress, who was convicted of six drug-related felonies in 1999 and was ordered to seek treatment for substance addiction and abuse involving codine, Soma, and Demerol. Kress admitted that he staged break-ins at a pharmacy where he was employed, and “diluted the pharmacy’s remaining stock of injectable Demerol, in an attempt to cover up his thefts.” His Ohio medical license was revoked in October, 1999, due to his criminal behavior, but was unfortunately reinstated on a conditional basis in 2000.

“The fact that Kress is in charge of all so-called ‘medical care’ at Planned Parenthood is certainly more cause for alarm,” said Newman. “This is another example of the abortion cartel hiring from the bottom of the barrel. Putting Kress in an abortion clinic where he has access to many of the same drugs to which he has been addicted makes about as much sense as hiring an alcoholic to pull the night shift a the liquor store.”

A transfer agreements and physician hospital privileges ensure that women suffering live-threatening medical emergencies receive continuity of care without delays once they reach the hospital. The agreements ensure that the emergency room staff will have access to communication with the abortionist and patient medical records.

“So often, we have seen abortionists just dump suffering women onto emergency room personnel without records or communication, leaving hospital staff in the dark about a patient’s condition and previous treatment,” said Newman. “This delays care in situations where minutes can mean the difference between life and death.”