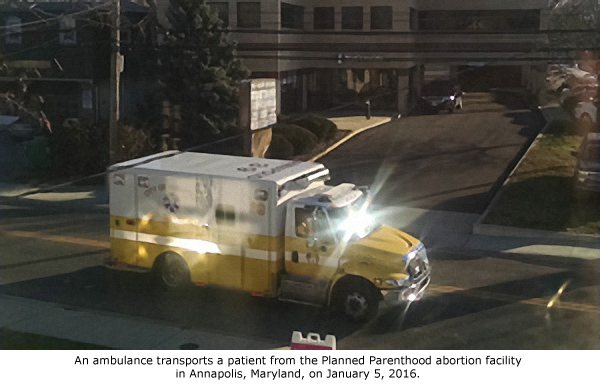 Annapolis, Maryland – Operation Rescue has received a heavily redacted emergency communications document through a public record request that confirms a patient of the Annapolis Health Center Planned Parenthood abortion facility was transported to a hospital for emergency treatment on Tuesday, January 5, 2016.

The Computer Aided Dispatch (CAD) printout of a 911 call indicated that patient was transported with a “Priority 3” status, which usually is used for “walking wounded” or those who are not suffering a life-threatening condition. No lights or sirens were used during the emergency, according to a witness who photographed the ambulance leaving the Planned Parenthood abortion facility.

The incident took place on a known abortion day at Planned Parenthood.

The Annapolis Planned Parenthood abortion facility was cited during its only inspection in 2013 for failure to ensure that surgical equipment was properly sterilized by using a faulty autoclave.

“Information gleaned from the CAD document clearly indicates that a Planned Parenthood patient suffered some kind of emergency. Based our long experience researching medical emergencies at abortion facilities, it was most likely a complication of some kind to an abortion,” said Operation Rescue President Troy Newman. “It is unfortunate that the authorities in Anne Arundel County over-redacted the document so we cannot know the kind of complication that was suffered. It is in the public’s interest to know whether county resources are being drained by incompetent treatment at Planned Parenthood.”

Planned Parenthood abortion facilities across the country are increasingly using their political clout to prevent public documents related to abortion injuries from being properly released.

In order to protect the public’s right to know how public services are being used by abortion facilities, Operation Rescue has sued the St. Louis Fire Department for access to 911 records related to over 50 medical emergencies that have taken place at the Planned Parenthood abortion facility in St. Louis, Missouri, since 2009. That case is pending.

“The abortion businesses across America, but especially in Maryland and Missouri, are fighting hard to keep the truth about abortion injuries from the American people,” said Newman. “We must fight back through the courts in order to preserve governmental transparency that can expose abuse and ultimately save lives.”