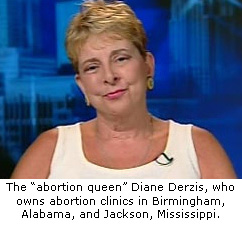 Birmingham, AL – New evidence has been obtained through an open records request that indicates an abortion clinic in Birmingham, Alabama, downplayed the seriousness of the conditions of two abortion patients that were transported to hospital emergency rooms on the same morning.

CEC for Life, led by Fr. Terry Gensemer, obtained copies of two 911 recordings and the Computer Aided Dispatch (CAD) transcripts of emergency calls that were placed from New Women All Women Health Center on January 21, 2012. CEC for Life then shared the documents with Operation Rescue, which produced a video featuring the 911 recordings and photographs taken at the scene.

The recordings were heavily redacted and missing the last half of their content, but were enough to tell that the two each women suffered from an overdose of the drug Vasopressin, which is used to treat low blood pressure that results from heavy blood loss.

“There is more going on here than just a drug overdose. It is apparent that both of these women suffered blood loss, resulting in low blood pressure that was improperly treated with an overdose of Vasopressin,” said Troy Newman, President of Operation Rescue and Pro-Life Nation.

“With this new information, complaints will certainly be filed. We will be asking authorities for an emergency closure of this abortion business and suspension of the abortionist’s medical license.”

The abortionist on duty that day was Bruce Elliot Norman. (View his profile page at AbortionDocs.org.)

CAD transcripts show that paramedics were first summoned to New Woman All Women at 9:24 AM and were told to go to the back alley entrance, but were turned away without seeing any patient. Forty-eight minutes later, clinic owner Diane Derzis, known by state legislators as the “abortion queen” for her pro-abortion lobbying efforts, called 911 for the second time.

Derzis told the dispatcher that two women had suffered an overdose of Vasopressin and needed to be taken to the UAB hospital for “observation.” Emergency units were dispatched at “Priority 3” but that designation changed to “Priority 1” upon arrival, reflecting a more serious situation that first thought.

Paramedics had to negotiate down a trash, strewn alley to an entrance that could not accommodate a gurney. The two women had to be hand-lifted out of the clinic and down a set of stairs past a broken safety rail in order to reach the gurneys next to an open dumpster. The fate of the women remains unknown.