Bakersfield, CA – Despondent over a divorce, Donald Clyde Willis, walked over to a park near his Oregon home on the night of September 20, 1993, put a revolver to his head and pulled the trigger. The next morning, a passerby found him and called 911.

Willis claimed in a 1996 medical board case that he never lost consciousness after he attempted suicide. He underwent surgery to remove bone and part of his brain. Once he recovered enough, he was admitted to a mental ward where he was treated for three months.

In danger of losing his medical license, Willis made a voluntary agreement with the Oregon Board of Medical Examiners to numerous restrictions on his ability to practice medicine.

It was then that Donald Clyde Willis decided to become an abortionist. 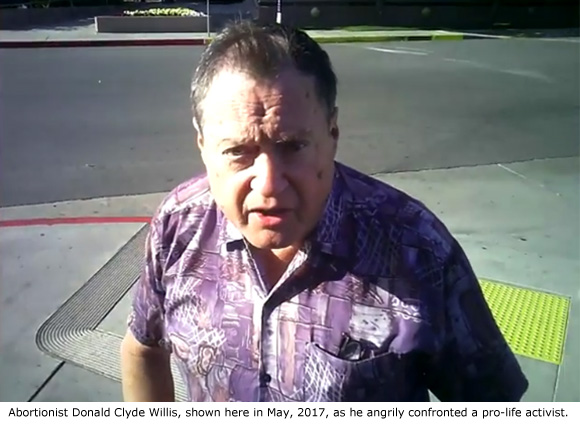 He soon moved to California where the medical board in that state ruled that since the Oregon restrictions were voluntary, Willis should be allowed to practice in California without restriction.

Today, Willis works as an abortionist at FPA Women’s Health, a high-volume abortion facility in Bakersfield, California. He avoids the pro-life activists who stand vigil outside the abortion facility, often parking several blocks away and slipping in the clinic’s back entrance to avoid detection.

On August 19, 2017, he sent his fifth known Bakersfield abortion patient to a hospital emergency room this year.

Video taken by long-time pro-life activists Tim and Terri Palmquist showed a woman on a gurney who was loaded into an ambulance and transported to Kern Medical, a nearby hospital. At the hospital, ambulance personnel offloaded her and wheeled her directly into the emergency room entrance.

Willis was later seen walking down an alley toward the hospital carrying a briefcase. The deep scar in the middle of his forehead is still a visible reminder of a trouble history of mental illness that resulted in a failed suicide attempt and a sudden attraction for the business of abortion that brought about a dramatic career shift.

But Willis does not seem to be particularly good at his chosen profession. Other women were similarly transferred to hospitals suffering from medical emergencies.

• January 10, 2017: A woman was extracted from the abortion business completely wrapped in sheets without any visible signs of ongoing treatment. It is unknown if she was still alive.
• February 4, 2017: (First Incident) A patient was wheeled out of the abortion business and transported with no lights or sirens to Kern Medical Center.
• February 4, 2017: (Second Incident) A woman was transported by ambulance to San Joaquin Hospital’s emergency room. She was covered in a sheet, but was obviously receiving ongoing medical care.
• February 18, 2017: A female patient was transported from FPA Women’s Health to a nearby hospital. The disturbing pattern of botched abortions caused Operation Rescue to issue an Urgent Public Safety Advisory to women seeking abortions in the area of Bakersfield, California.

“The five medical emergencies so far this year are proof that Willis poses a danger to the public,” said Operation Rescue President Troy Newman. “We urge the California Medical Board to take immediate steps to protect the women from suffering further injury by this troubled man.” 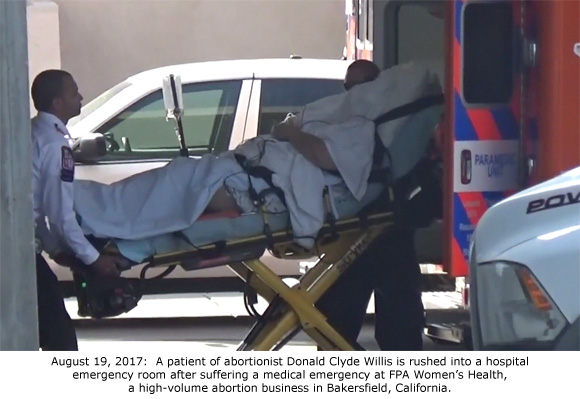