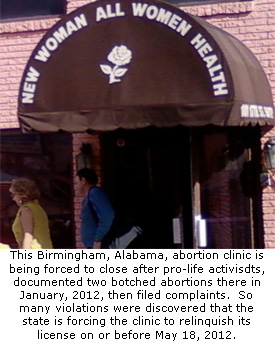 Birmingham, AL – Less than 24 hours after pro-life groups, including Operation Rescue and CEC for Life, publicly called for the Alabama Department of Public Health to close the troubled New Women All Women (NWAW) abortion clinic, the ADPH issued a press release today stating that the clinic has been ordered to surrender its license on or before May 18, 2012.

“This is such great news on this Good Friday and goes to show what men and women of faith can accomplish when they work together toward a common goal. We congratulate CEC for Life, which worked long and hard to bring an end to the abortion abuses at that notoriously dangerous abortion clinic,” said Troy Newman, President of Operation Rescue and Pro-Life Nation. “This victory represents a major defeat for the abortion cartel. We know lives of women and their babies will be saved because of this.”

The ADPH stated that the agency “performed a comprehensive investigation of New Woman All Women Health Care in Birmingham in response to a complaint received in January 2012. This investigation revealed significant failures in maintaining compliance with the Rules of the Alabama State Board of Health for the safe and effective provision of care.”

The complaint was filed by a pro-life activist in response to an incident on January 21, 2012, where two women were photographed being hand-carried from NWAW past a broken safety rail to awaiting ambulances parked in a trash-strewn alley. Recordings of two 911 calls were obtained through open record requests that showed the emergency calls were placed by clinic owner Diane Derzis, who indicated that two women had been overdosed on the drug Vasopressin.

The ADPH inspected the clinic and discovered 76 pages of deficiencies in nine categories, then took action to revoke NWAW’s operating license. Under threat of revocation and fines, the clinic reached an agreement to surrender their license next month.