You are here: Home / Abortion911 / UPDATE! Alive or Dead? What the Heck Happened To This Botched Abortion Victim?

UPDATE 11/29/2017: Thanks to our readers, we now have more answers. The position of the woman on the gurney has been clarified. She was actually laying on her right side in the fetal position with the restraint under her left arm. Her head cannot be seen in any of the photos. However, oxygen tubes are seen running to the area where her head would be. The conclusion is now that the patient was alive at the time of the transport, but in pain and in need of further care. We are thankful for the input from our readers and are grateful to have at least part of this mystery solved. As with any developing story, additional information has clarified this situation. The video description on YouTube.com has been edited to reflect this update. The article below has been edited to reflect this new information.

Hartford, CT – Disturbing photos have surfaced that show a woman bound at the neck to a gurney during a medical emergency at Hartford GYN Center on October 21, 2017.

The photos, which were taken by a pro-life activist who was on the scene when the emergency occurred, depicted a woman covered completely in white sheets. A sheet that covered her head appeared to be cinched at the neck. Update: However it was learned that the restraint was actually under the woman’s left arm. (See update above.)

Operation Rescue published a report about the incident last week that included a video featuring the actual 911 call placed by a Hartford GYN nurse. That call indicated that a patient was in the middle of an abortion procedure and was experiencing “excessive bleeding.” The abortion business requested an ambulance to transport the hemorrhaging woman to Hartford Hospital.

The troubling photos also showed the woman lying in the fetal position with her knees bent under the sheet.

A search of recent obituaries in the Hartford area was inconclusive.

“We will keep researching this horrific incident until we get answers,” said Newman. “In the meantime, women should be warned that this abortion facility is not safe.” 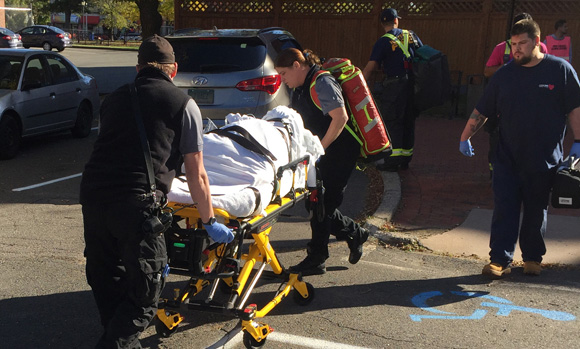