You are here: Home / Abortion911 / Ambulance Dispatched for Medical Emergency at Dr. Emily’s Abortion Facility in the Bronx 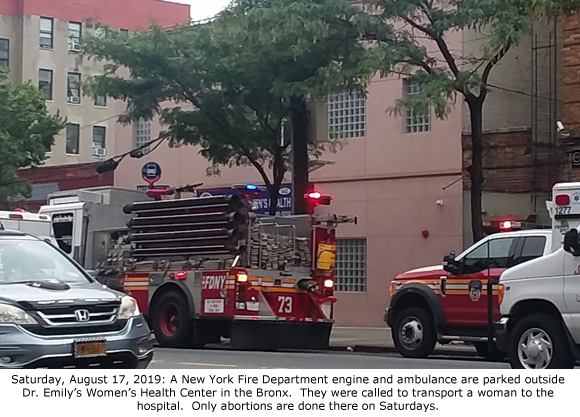 The Bronx, NY – An ambulance and a fire unit were dispatched to Dr. Emily’s Women’s Health Center, an abortion facility in the Bronx, New York, on Saturday, August 17, 2019.  The ambulance transported a woman to the hospital suffering unknown complications, likely from an abortion.

According to the clinic’s website, Saturdays are open for abortions, even on a walk-in basis, but not for other services.

In response to a public records request made by Operation Rescue, the New York Fire Department acknowledged the request then added, “You can expect a response on or about Wednesday, January 8, 2020.”

“Despite the delay tactics, we will not stop trying to find out the truth that is contained in those public records,” said Troy Newman, President of Operation Rescue. “The people have a right to know when and why public services are used by abortion facilities. Covering up botched abortions only makes things less safe for women who have no idea of the harm caused to others or dangers they actually face.”

Operation Rescue confirmed that the abortionist at Dr. Emily’s Women’s Health Center is Jane E. Kaufman, who appears to have taken over recently for former abortionist Brian Park, who is no longer conducting abortions.

The website Vitals.com noted that Kaufman works or has worked at the Margaret Sanger Planned Parenthood, located at 26 Bleecker Street in Manhattan.  That abortion facility is known for its frequent medical emergencies that require patients to be rushed to local hospitals.

In 2012, while at its former location on Southern Boulevard in the Bronx, pro-life activists filmed bags of trash discarded onto the public sidewalk.  Those bags were filled with bloody trash that included recognizable aborted baby remains.  Complaints filed against Dr. Emily’s Women’s Health Center abortion business by Operation Rescue were ignored by New York authorities.

According to its website, Dr. Emily’s Women’s Health Center conducts surgical abortions to 24 weeks and dispenses abortion-inducing drugs up to 10 weeks of pregnancy.

“A new location and new abortionist have not made Dr. Emily’s any safer for women or for their babies,” said Newman.  “With the liberalization of abortion laws this year in New York that also curtailed clinic accountability, we can only expect to see more medical emergencies at facilities like this. Women should be aware of that, and instead, seek help with the challenges they face at offices that offer legitimate medical care and assistance.”