You are here: Home / Abortion911 / Ambulance Dispatched to Abortion Facility that Employs an Abortionist Accused of Domestic Violence

Cherry Hill, NJ – An abortion facility employing an abortionist who was caught on video trying to force his girlfriend to get an abortion has sent another woman by ambulance to a hospital emergency room.

Operation Rescue obtained a recording of radio traffic from Camden County Fire and EMS that revealed an ambulance was dispatched for someone suffering a “respiratory emergency” at the Cherry Hill Women’s Center. The patient’s current condition is unknown.

This is the fourth known time since September 2015, that an ambulance has been called to the Cherry Hill Women’s Center for emergency help the abortion facility was not equipped to provide.

One abortionist who is known to work there is Eric Yahav, who was recorded by his girlfriend in December 2015, as he attempted to force her out of their home and take her against her will to abort their baby. The girlfriend later fled to safety and obtained a protective order against Yahav. A complaint with the New Jersey Board of Medical Examiners was closed without action, despite the hair-raising evidence of domestic abuse that was submitted in that case.

It is unknown whether Yahav was involved in the January medical emergency.

“While abortion supporters continue to cling to the claim that abortion is safe, that claim is refuted by one women after another who are being rushed to the emergency rooms by abortion facilities like the Cherry Hill Women’s Center,” said Troy Newman, President of Operation Rescue. “Even so, the incidents we see are just a small fraction of the actual number of women injured and hospitalized each year.”

Since January 2017, Operation Rescue has documented 70 medical emergencies that required ambulance transport from abortion facilities around the nation. This averages to five incidents each month. However, that number only represents incidents reported to Operation Rescue during that time and does not take into account complications that manifest after women leave the abortion facilities. 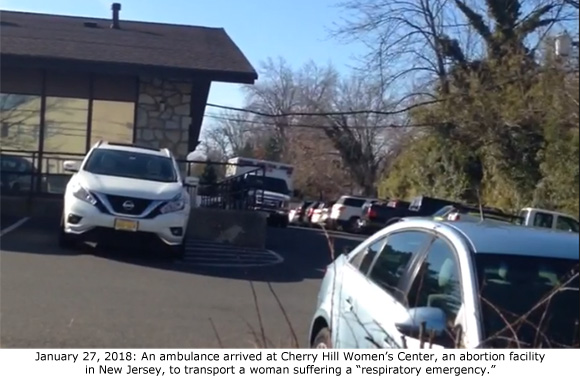