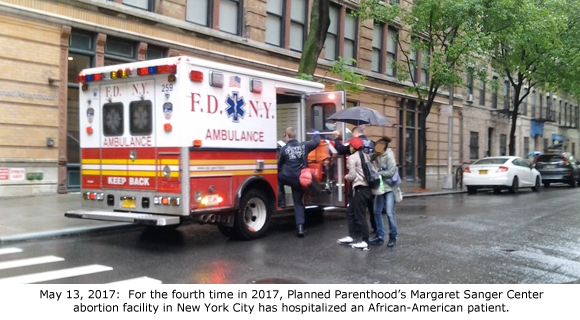 New York City, NY – In what has become a tragically routine occurrence, an African-American abortion patient was transported by ambulance from the Margaret Sanger Planned Parenthood abortion facility, located at 26 Bleecker St. in New York City.

Photos of the incident taken by an alert pro-life activist on the scene are the only evidence available to document the medical emergency. Operation Rescue’s repeated efforts to obtain the 911 records have been completely ignored by the New York Fire Department. A search of the radio traffic archives for the most recent incident showed either static during the time of the emergency or had audio files missing altogether.

Medics arrived at the Planned Parenthood abortion facility at 10:56 a.m. on May 13, 2017, and entered with a rolling chair. However, the patient walked out of Planned Parenthood under her own power with a bit of assistance from another woman who had accompanied her to the abortion business.

“After so many women have been injured and killed by so-called ‘safe’ abortions at Planned Parenthood, one would think that defunding them would be an easy thing for Congress to accomplish,” said Operation Rescue President Troy Newman. “It is unconscionable for our tax dollars continue to enable Planned Parenthood despite their butchery – not to mention the criminal referrals made a few months ago by House and Senate investigatory panels.”

Earlier this year House and Senate separately issued criminal referrals to the Department of Justice and state attorneys general seeking criminal investigations and prosecutions of Planned Parenthood Federation of America and five affiliated Planned Parenthood organizations after uncovering evidence that Planned Parenthood engaged in the illegal sale of aborted baby remains and other crimes. 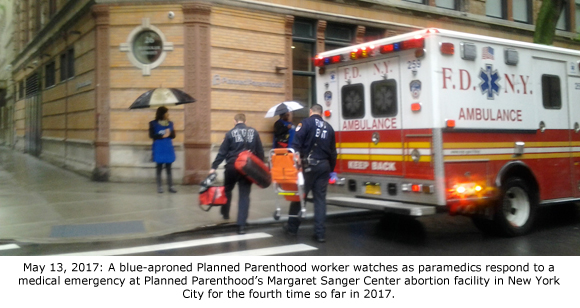