Dangers of abortion underscore the need to defund the abortion giant 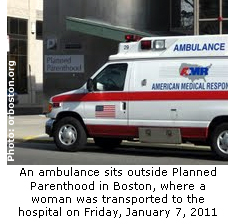 Boston, MA — Two ambulances and a fire truck arrived around mid-morning at the Planned Parenthood abortion clinic in Boston, Massachusetts, on Friday, January 7, 2011, according to eye witnesses. Pro-lifers on the scene said they saw one woman wheeled out the front door on a gurney and loaded into one of the awaiting ambulances. The incident was reported by Bill Cotter of Operation Rescue Boston.

While it is unclear the exact nature of the emergency, there is a clear pattern in the abortion industry to call ambulances only in the event of a life-threatening emergency.

“Ambulances at abortion clinics make them look bad and drive off business. Even when life-threatening abortion complications exist, we have seen numerous examples where abortion clinics have refused to call ambulances, so in this case, you could say the woman was lucky,” said Operation Rescue President Troy Newman.

“The dangers women face at abortion clinics like Planned Parenthood cannot be underestimated because the clinics operate in secrecy with almost no accountability,” said Newman. “To add insult to injury, these abortion mills operate with our tax dollars propping them up. Over 70% of Americans are opposed to paying Planned Parenthood to take the lives of innocent babies and injury women through shoddy practices.”

Congressman Mike Pence of Indiana has introduced a bill titled the Title X Abortion Provider Prohibition Act that would cut off Federal funding for Planned Parenthood and institutions that support abortion. Last year, the American taxpayer doled out $363 million in Federal funds alone to Planned Parenthood, which committed “an unprecedented 324,008 abortions,” according to Rep. Pence. Planned Parenthood organizations in several states are under investigation for improperly spending tax dollars.

“If Planned Parenthood did not have hundreds of millions of our tax dollars flooding their coffers each year, they would not be able to continue to operate on their present scale. Cutting off funding to Planned Parenthood would save lives protect women from suffering the same fate as the woman seen headed to the emergency room last Friday. We support Rep. Pence’s legislation one hundred percent,” said Newman.

Note: Photo is from a previous incident at Planned Parenthood in Boston.