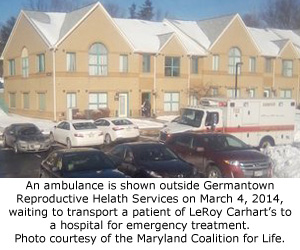 An ambulance arrived at about 4:00 p.m. in response for a call for emergency assistance. It transported a female patient to a local hospital. Carhart was not seen with his patient during the incident.

Due to a snowstorm, Carhart was unable to see women scheduled for multi-day late-term abortions as usual on Sunday. Carhart was seen by witnesses at the Germantown Reproductive Health Services abortion clinic between 5:00 and 11:00 p.m. on Monday then was back at the clinic 9:45 a.m. Tuesday morning where at least 16 abortion patients were seen.

“It appears that Carhart was once again conducting surgeries on women in a fatigued state, as he is known to do. He brags of never taking a day off. At the age of 72, we believe he is endangering women with his irresponsible behavior, and this latest medical emergency in Germantown is more evidence of that,” said Troy Newman, President of Operation Rescue.

As far back as 1993, Carhart was ordered by the Nebraska Attorney General to stop “interrupting or delaying a surgical procedure including abortion due to or as a result of his exhaustion or fatigue.”

Medical emergencies at Carhart’s abortion facilities in Maryland and in Bellevue, Nebraska, have become more frequent in recent months, leading to concerns that he is unfit to continue practicing medicine.

Dates of other incidents involving Carhart documented by Operation Rescue include:

In 2005, Carhart was involved in the death of 19-year old Christin Gilbert from complications of a third trimester abortion at a late-term abortion clinic in Kansas. 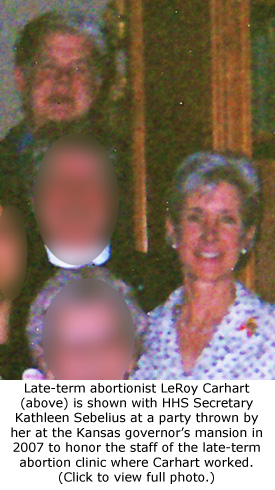 Despite all these abortion-related medical emergencies and deaths, medical boards in Maryland and Nebraska have been reticent to hold Carhart accountable, perhaps due to his strong ties to U.S. Secretary of Health and Human Services Kathleen Sebelius.

Operation Rescue obtained and published photos of Carhart partying with Sebelius during her term as Governor of Kansas when Carhart worked for the notorious late-term abortionist George Tiller in Wichita. Tiller was a large campaign contributor to Sebelius campaigns. Sebelius hosted that secret party to honor Tiller and his entire abortion clinic staff, according to a woman who was present at the soiree.

Sebelius acted to protect Tiller and other abortionists in Kansas — including Carhart – from investigations launched by then-Attorney General Phill Kline and the Kansas Board of Healing Arts.

“I suspect that medical board officials fear political fallout or even retribution from Secretary Sebelius if they take significant action against Carhart,” said Newman. “If that is the case, they are responsible for the injury or death of at least six women that we know about in the past few months. It’s time for them to put politics aside and exercise their duty to protect the public from Carhart and his dangerous abortion practices.”

Operation Rescue is in the process of filing a complaint with the Maryland Board of Physicians demanding an emergency suspension of Carhart’s medical license pending a full investigation into the recent rash of abortion injuries.