Operation Rescue again calls on the Obama Administration to defund Planned Parenthood in light of a recent spate of injuries that have left women, hospitalized, infertile, or dead. 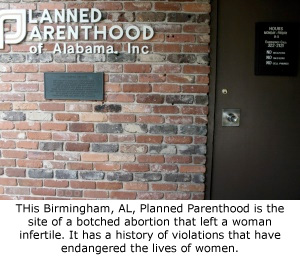 Birmingham, AL — A Planned Parenthood abortion clinic in Birmingham, AL, has been sued for negligence for a botched abortion that took place while the clinic was on probation for supplying abortions to underage teens without parental consent.

The suit, filed last month, also includes as a defendant California abortionist Aqua Don Emmanuel Umoren, who contracts to do abortions for Planned Parenthood in Birmingham and for another abortion clinic in Huntsville. He is accused of falsifying medical records and negligently failing to diagnose a patient’s tubal pregnancy, which painfully ruptured 25 days later necessitating emergency surgery. She is now infertile.

Roberta Clark walked into the Birmingham Planned Parenthood on August 20, 2010, for what she thought would be a routine first-trimester abortion. An ultrasound exam was conducted by an unlicensed, untrained worker said indicated that Clark was 8 weeks, 4 days pregnant with an intrauterine pregnancy, when in fact, the ultrasound indicated there was no baby in the womb. Umoran noted in Clark’s chart that he conducted a pelvic exam that he said concurred with the 8 week, 4 day diagnosis.

“Umoren was either so incompetent that his manual exam failed to determine that she had no intrauterine pregnancy, or he lied on Clark’s chart. This ultimately placed Clark in a life-threatening situation. She was lucky to survive,” Troy Newman, President of Operation Rescue and Pro-Life Nation.

“We wouldn’t tolerate this kind of quackery in any other medical discipline, and we shouldn’t tolerate it when it comes to abortion. Umoren should have his license revoked and Planned Parenthood in Birmingham should be shut down.”

Clark was given a suction abortion, after which she continued to complain of nausea, vomiting, and pelvic pain. The pathology report that indicated no fetal parts were identified in the tissue specimen that had been submitted for inspection that same day. Clark was not informed of this nor is there a record of her receiving any follow-up care from Umoren or Planned Parenthood.

Twenty five days later, Clark was in a Birmingham hospital E.R. undergoing emergency surgery to save her life. Doctors removed her ruptured fallopian tube containing a 13-week fetus and placenta.

“This case reveals the dangers of fly-in abortionists who provide no continuity of care. This practice places women at risk and should not be allowed,” said Newman. “We intend to file complaints against the abortionist and Planned Parenthood for gross violations of the standard of care.”

In addition to being on probation at the time of the incident, a health inspection conducted a few months later indicated that Planned Parenthood had multiple deficiencies including shoddy record-keeping and failure to give patients discharge instructions.