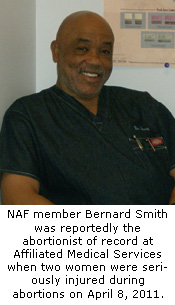 Milwaukee, WI – As the National Abortion Federation prepared for its annual conference in Chicago this week, one of its former Board members sent two abortion patients to the hospital. Two women were transported for emergency care in one day from the Affiliated Medical Services abortion clinic located at 1428 North Farwell Avenue in Milwaukee, Wisconsin. The condition of the two women is currently unknown.

The first ambulance arrived with sirens blaring and lights flashing at about 10:50 AM. Pro-life participants in a 40 Days for Life prayer vigil witnessed the incident. One recorded it on his telephone video recorder. Dan Miller, Milwaukee coordinator for 40 Days for Life provided Operation Rescue with the raw video.

After some time, emergency workers emerged from the abortion clinic with a woman on a gurney. Clinic escorts held up a blanket or dark sheet to hide the incident from the pro-life witnesses who were documenting it. The woman was rushed to Columbia St. Mary’s Hospital.

At approximately 12:55 PM, the second ambulance arrived, this time without lights or sirens. The video shows an ambulance of a different color and parked in a different place, leaving no doubt that there were two separate incidents. Again, clinic escorts held up a dark sheet to conceal the woman on a gurney that was loaded into the awaiting ambulance and taken to an unknown location.

“The abortionist cannot hide his dirty work behind ‘sheets of shame.’ While we only see a small fraction of the abortion injuries inflicted upon women, the truth about unsafe clinics and shoddy abortionists continues to come out,” said Operation Rescue President Troy Newman. “These are two more urgent reasons why our tax dollars must not fund abortion providers.”

The abortionist reportedly on duty was Bernard Smith, a current member of the NAF, who boasts on his abortion clinic web site of having “expertise in Quality Assurance and safe clinical practice.” Unfortunately, that so-called expertise failed the two women and their babies who landed in the hospital.

“Smith sent two women to the hospital. Now it’s time for the authorities to hold him accountable for the injuries he caused,” said Newman. “We will be filing a complaint with the Wisconsin Department of Regulation & Licensing based on these two emergency transports.”