You are here: Home / Abortion911 / Bedlam Breaks Out in Bakersfield Abortion Clinic as Ambulance Arrives for Patient

Bakersfield, CA – Bedlam broke out at the FPA Women’s Health abortion facility in Bakersfield as an ambulance arrived to transport a patient suffering a medical emergency. During the incident two abortion supporters assaulted pro-life activists trying to document the incident, which took place on February 23, 2016.

As the ambulance arrived, several clinic workers wearing red scrubs surrounded the ambulance with white sheets to impede those who were trying to photograph the incident.

As a woman was being prepared for emergency transport, a man and woman began to push and shove Tim and Terri Palmquist, a husband-wife sidewalk counseling team. The man followed Terri in a harassing manner and attempted to block her on the public sidewalk while the woman knocked over a ladder that moments earlier Terri had used to take photos over the sheets held by the clinic workers. 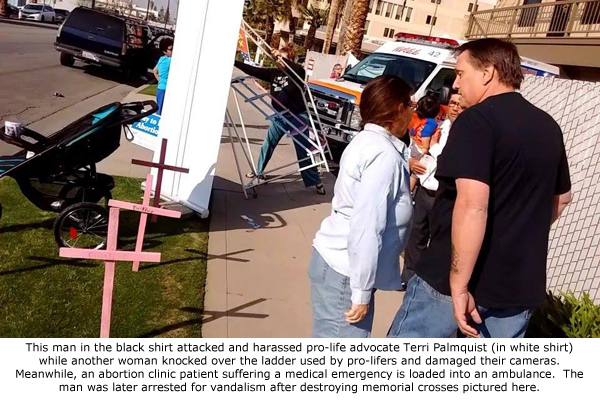 Later, the man kicked over memorial crosses that were stuck into the public easement around the abortion facility then threw a cup of soda at Tim Palmquist. Once police finally arrived, the man was arrested for vandalism.

“We so appreciate Tim and Terri Palmquist for their sacrifices on the streets that have not only saved hundreds of lives, but have also documented the threats to women’s lives and health posed by this shoddy abortion business,” said Operation Rescue President Troy Newman.

Thanks to the Palmquists, Operation Rescue has documented ten medical emergencies at this FPA abortion facility just since August, 2012. This means that the Bakersfield FPA Women’s Health abortion facility hospitalizes an abortion patient on average about once every four months.

The abortionist on duty during the most recent incident was Alexander Simopoulos, a Beverly Hills based cosmetic surgeon who specializes in female genital cosmetic surgery, vaginal reconstruction, and other plastic/cosmetic surgeries for celebrities and others. 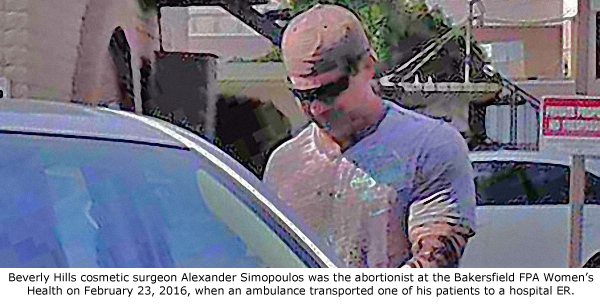 Just to illustrate this abortionist’s true view of women, Simopoulos has appeared in a television episode of Bravo’s Millionaire Matchmaker, where he confessed that most of his relationships with women are based on sex.

However, an article researched and penned by Tim Palmquist explains that women Simpoulos met on the show considered him “Dr. Freak,” “creepy,” “gross,” and “Dr. Frankenstein.” One woman was so appalled by his behavior that she warned, “women of the world, stay away!”

Most of the clips from the Simpoulos episodes have since been removed from the Bravo Channel website and YouTube.com, but one of the Palmquist’s videos showing Simpoulos at FPA can be viewed here on Facebook.

The Bakersfield FPA Women’s Health abortion business was named by Operation Rescue earlier this year as one of the most dangerous abortion facilities in America.

Operation Rescue is calling on the California Medical Board to shut this abortion facility.

[All photos courtesy of Tim and Terri Palmquist.]