Little Rock, AR – A medical emergency that took place last month at Little Rock Family Planning, an abortion facility located in Little Rock, Arkansas, has opened the door to learn more about a dangerous increase in life-threatening abortion complications at that facility since the start of 2018.

It began on March 31, 2018, when pro-life activists photographed an ambulance at Little Rock Family Planning.

Pro-life activist Mary Silfies told Operation Rescue that a Freedom of Information Act (FOIA) request for 911 records related to the incident was denied by the Little Rock City Attorney “because it involved a juvenile.”

A second FOIA request was made to the publicly-funded ambulance company, Metropolitan Emergency Medical Services (MEMS), which complied with a heavily redacted audio recording and Computer Aided Dispatch printout.

A close inspection of the CAD printout revealed under one of the redactions that the young patient suffered hemorrhaging and lacerations.

However, the recording did contain a revealing question at the end of the conversation between the 911 dispatcher and the abortion facility caller.

“Alright, do you have AED there,” asked the dispatcher, to which the call replied in the affirmative.

AED is short for “automated external defibrillator,” which is used to check a patient’s heart rhythm and can send a shock to restore a normal heartbeat. It is also used in the event of a cardiac arrest.

“The fact that the dispatcher was inquiring about the presence of the AED was another indication that young woman was in pretty bad shape,” said Operation Rescue President Troy Newman.

In addition, Silfies also was able to obtain a printout that contained all service requests for ambulances to the abortion facility’s address that contained 61 incidents dating back to 1999. One of the incidents included in the printout was for a different location, leaving 60 calls originating from the Little Rock Family Planning abortion facility over the past 19 years.

In all 60 cases, including the emergency involving the juvenile on March 31, 2018, patients were transported to the University of Arkansas Medical Sciences (UAMS) Hospital for emergency medical care that could not be provided at the outpatient abortion facility.

This data shows that an average of medical emergencies requiring emergency ambulance transport from Little Rock Family Planning is just over three per year. 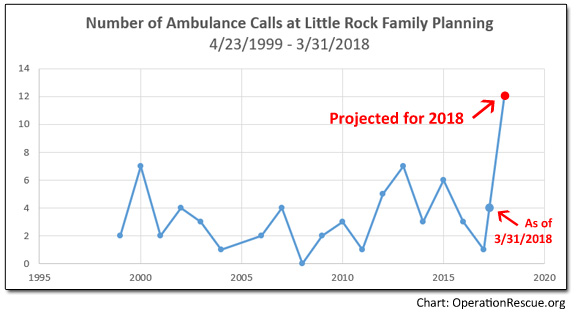 However, there have already been four such emergency transports in the first three months of 2018 alone. This put the abortion facility on track for a record-breaking number of abortion injuries.

“Whatever is going on at the Little Rock Family Planning is posing a serious danger to women,” said Newman. “With these incidents on the rise, women must be warned that if they walk into that abortion facility, they may come out on an ambulance gurney. This place is just not save for women or their babies. It should be shut down!” 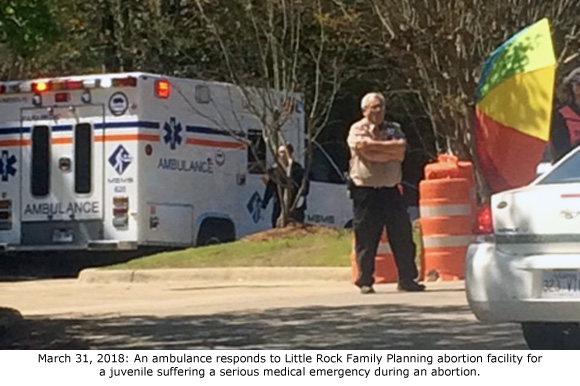