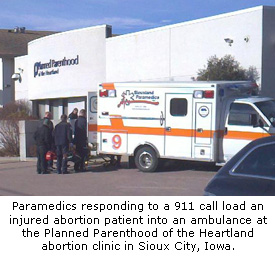 Sioux City, IA – An ambulance responded to an emergency call from Planned Parenthood of the Heartland in Sioux City, Iowa, at approximately 1:30 pm on Tuesday and transported a patient to a local hospital. Sidewalk counselors recalled seeing the same woman earlier in the day as she entered the clinic for an abortion. Her condition is unknown at this time.

Sherill Glassmaker, a pro-life activist who was just leaving a neighboring pregnancy resource center, noticed the ambulance in the parking lot and began taking pictures to document the incident.

A paramedic working for Siouxland Paramedics took time out from his job to approach Glassmaker and complain about her presence, but did acknowledge that he was responding to a 911 call for emergency medical assistance.

As Glassmaker prayed aloud for the injured patient, Planned Parenthood’s security guard mocked and threatened to file charges against her in an obvious effort to intimidate her for documenting the incident.

Abortionist Nicola Moore, a Massachusetts abortionist who flies to the mid-west to do abortions for Planned Parenthood of the Heartland, was believed to be the abortionist on duty at the time of the incident.

Operation Rescue had earlier “outed” Moore as the “Fly in Abortionista” featured in a recent magazine article. An Operation Rescue undercover investigation revealed that Planned Parenthood was engaged in the experimental “telemed abortion” scheme, in which dangerous abortion pills are dispensed to women over an Internet connection without the presence of a licensed physician or a physical examination by qualified personnel.

“According to our investigations, Planned Parenthood of the Heartland has long been engaged in practices that endanger the lives of women. This is yet another reason why Planned Parenthood does not deserve even one cent of our tax dollars,” said Cheryl Sullenger, Senior Policy Advisor for Operation Rescue.

“Women who patronize Planned Parenthood or any other abortion clinic literally risk their lives. We plan to file complaints concerning this incident with the appropriate Iowa oversight agencies in order to protect women from Planned Parenthood’s unscrupulous practices.”