UPDATE 08/23/2016: Operation Rescue has obtained the CAD report for this incident, which indicates a female patient suffered severe vaginal bleeding after a “procedure.” View the CAD.

Denver, CO — While Planned Parenthood continues to portray itself as a provider of “quality health care,” one patient who was transported to the hospital over the weekend might have something quite different to say about what a Planned Parenthood did to her.

On Saturday, August 13, 2016, an employee of the Stapleton Planned Parenthood, located at 7155 E. 38th Avenue in Denver, Colorado, called for emergency help with a patient who was bleeding badly enough to warrant immediate hospitalization.

Local pro-life activists photographed the incident. Denver Fire Department Radio traffic confirmed in a brief dispatch order that there was a “party bleeding” at the Planned Parenthood facility. 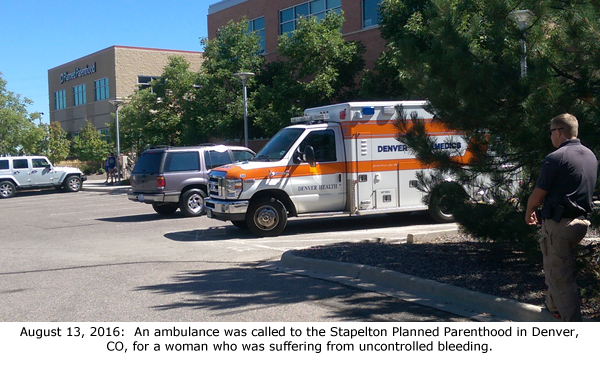 While it is unknown exactly who was responsible for the conducting the abortion, one provider known to work at that facility is Savita Ginde, who serves as Vice President and Medical Director for Planned Parenthood Rocky Mountain.

Ginde was featured in an undercover video released by the Center for Medical Progress discussing the sale of aborted baby remains. She was caught on camera identifying several organs from one dismembered aborted baby that could have netted Planned Parenthood $200 to $300.

“I think the ‘per item’ thing works a little better just because we can see how much we can get out of it,” Ginde told undercover CMP journalist David Daleiden in a discussion about financial compensation for each organ or body part.

“Once the facts come out, the propaganda rhetoric of Planned Parenthood falls apart. In truth, Planned Parenthood is the largest abortion business in the U.S., and they will do just about anything to make money,” said Troy Newman, President of Operation Rescue, who also served as a founding board member for the Center for Medical Progress. “It preys on vulnerable pregnant women for profit, but when something goes wrong with the abortion product they sell, Planned Parenthood is nowhere to be found. They pack women off to the emergency room to let someone else clean up their mistakes.”

Pro-life activists have documented other medical emergencies at the Stapleton Planned Parenthood abortion facility, including one on October 26, 2012, when an ambulance was called for a hemorrhaging patient, and another incident on March 5, 2013, for a patient suffering severe abdominal pain after an abortion.

This Planned Parenthood facility was also sued in 2014 for failing to report suspected child sex abuse on a 13-year old girl. She had been raped by her step-father, who arranged the secret abortion to cover up his crime then accompanied her to Planned Parenthood, where her abortion was done with no questions asked.

“Anyone who opposes the blatant exploitation of vulnerable human beings for profit would do well to work to shut this horrendous abortion business down,” said Newman.
_________
[HT: Jo Scott and Leslie Hanks for the photos]