Ambulance rushes second patient to the hospital this month 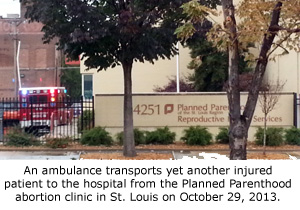 St. Louis, MO – For the second time this month, pro-life activists helplessly looked on as yet another ambulance rushed away from the St. Louis Planned Parenthood abortion clinic headed for a hospital emergency room. The October 29th incident is the twenty-third documented abortion emergency at this troubled clinic since July, 2009.

Emergency workers spent 14 minutes inside the Planned Parenthood office, the last remaining abortion clinic in Missouri, before emerging with a woman on a gurney covered head to toe with a sheet. The ambulance departed without the use of its lights or siren.

“Something is seriously wrong at the St. Louis Planned Parenthood abortion clinic. One woman after another is pulled out of that mill on a gurney. It’s beyond belief that the authorities there have such apathy toward the plight of these women. Enough is enough!” said Cheryl Sullenger, Operation Rescue’s Senior Policy Advisor.

Operation Rescue plans to call on Missouri Legislature and Attorney General to take emergency action to protect women from the shoddy abortion practices that have landed at least two dozen women – and likely many more — in the hospital.

“If you had a liposuction clinic or vision correction surgery clinic hospitalizing this many people, it would have been shut down by the Health Department long ago. We also understand that the medical emergencies we documents are just the tip of a very large iceberg as far as abortion complications are concerned,” said Sullenger.

Efforts to obtain public 911 communications from St. Louis have been met policy changes that have obstructed the release of public information. Those changes have insulated Planned Parenthood and allowed the injuries to continue.

“This Planned Parenthood is subjecting women to substandard practices as if they don’t deserve anything better than quackery,” Sullenger continued. “We’ve complained to the medical board, the health department, and even the mayor. Everyone has turned a blind eye to the evidence. It is so reminiscent of the corrupt political climate that covered up for Philadelphia abortionist Kermit Gosnell for years that it is appalling. Those bureaucrats have blood on their hands and deserve to be terminated from state employment.”

Medical emergencies at St. Louis Planned Parenthood over the past 11 months include:

Operation Rescue will announce in the coming days what specific legal actions have been taken to stop the carnage at this very dangerous Planned Parenthood office.