Bakersfield, CA – In two separate incidents, ambulances transported two abortion patients from FPA Women’s Health in Bakersfield, California. The emergency transports took place on Saturday, February, 4, 2017, within less than one hour of each other. The women were taken to different nearby hospitals.

The abortionist on duty was Donald Clyde Willis, who has a history of mental disorders that led to a violent suicide attempt. The latest two ambulance transports represent the third and fourth abortion-related medical emergencies involving Willis since he began working at the Bakersfield facility approximately three months ago.

During the first incident, Hall Ambulance #08 arrived FPA Women’s Health at about 1:00 p.m. with lights on and sirens blaring. The ambulance backed into and a facility worker came out to hold up a sheet to block anyone from taking pictures while the women was being loaded into the back of an ambulance. The ambulance left running no lights or sirens in the direction of Kern Medical Center. Experienced pro-life activist Terri Palmquist posted video of the incident live on Facebook. 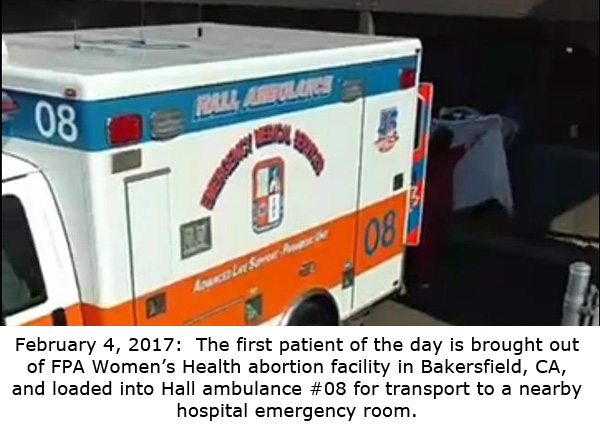 The second incident, involving Hall Ambulance #53, took Palmquist by surprise, arriving at approximately 1:49 p.m. with lights and sirens on. She phoned her husband, Tim, who videotaped the incident and recorded the arrival of that ambulance at the hospital emergency room.

The ambulance pulled almost up to the door of the abortion facility, and the woman was loaded into the back. She was transported to San Joaquin Hospital, which is about a block from the abortion facility. At the hospital, video showed that she was being treated with an IV while paramedics held the sheet above her face.

So far, fifteen women have been rushed by ambulance from this FPA Women’s Health abortion facility since August 2012, and the third one during the opening weeks of 2017. Video from the last emergency there on January 10, 2017, showed a patient who was not actively being treated tightly wrapped mummy-like in a sheet from head to toe. 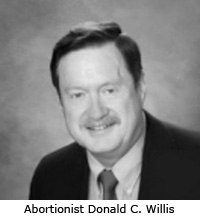 On September 20, 1993, Willis attempted to kill himself in a public park near his home in Portland, Oregon, by shooting himself in the forehead with a .22 caliber revolver. His Oregon disciplinary records reveal the following:

Although he never lost consciousness, respondent remained in the park until the following morning, when he was discovered by a passerby. He thereafter underwent surgery for the removal of pone and bullet fragments before being transferred to the Menninger Foundation in Topeka, Kansas, for three months of inpatient psychiatric care.

Once released from psychiatric care, Willis volunteered to allow restrictions to be placed on his medical license, including an order that required him to practice only under supervision. Soon after, he voluntarily surrendered his Alaska medical license. Willis has since allowed his Oregon license to expire, but he continues to practice almost exclusively in the field of abortion in California without restriction.

“There are serious patient care problems of crisis proportions at the Bakersfield FPA. These issues must be addressed by the Medical Board, but we have been informed by them that unless we provide patient names and contact information, they will no longer investigate our complaints. This bad policy has only made abortionists less accountable and more dangerous to women,” said Operation Rescue President Troy Newman. 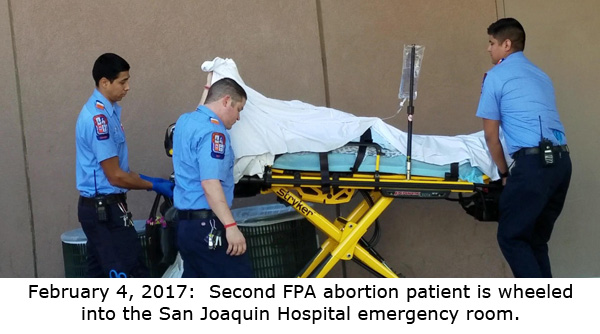 But for pro-life advocates in Bakersfield, not every day is as tragic as Saturday. Just five days before the double emergency transports, Terri Palmquist reported that pro-life activists experienced a banner day. They were able to save the lives of seven babies through their advocacy.

“We applaud Tim and Terri Palmquist, who have tirelessly documented the dangers at this abortion facility while offering practical help to women, both before and after their abortions. They are responsible for saving the lives of countless babies and warning women of the dangers that await them during abortions. They are doing an amazing work.”
____________
Photos and video courtesy of Tim and Terri Palmquist