You are here: Home / Abortion911 / Can Women Trust Planned Parenthood With Their Healthcare? 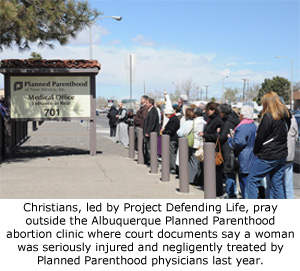 Planned Parenthood is the nation’s largest abortion provider, but for those of us who have a moral objection to abortion, we are told not to oppose Planned Parenthood altogether because they provide other “essential healthcare services for women.”

However, Planned Parenthood has made national news recently for covering up child sex trafficking, botching 18 abortions in 2012 alone (including the death of Tonya Reaves in Illinois), and Planned Parenthood has come under fire after they claimed to provide patient mammograms to ensure continued funding from the U.S. government, when in fact they do not.

Tara Shaver, formerly of Project Defending Life, has obtained public records indicating an active lawsuit filed against Planned Parenthood of New Mexico for medical malpractice and negligence, lack of informed consent and more. The Plaintiff in this lawsuit alleges that on August 29, 2011 abortionist Shauna Jamison and Dr. Richard Adams performed a tubal ligation to sterilize her. However, three days later the plaintiff was admitted to the University of New Mexico Hospital emergency room where she underwent an emergent laparotomy surgery. She endured a bowel perforation during her tubal ligation and spent three days in agonizing abdominal pain, and to top it all off seven months later she became pregnant! A New Mexico Medical Board complaint will be filed this week with regard to this negligence, and signifies that all three of Albuquerque’s abortion clinics have posed a grave danger to public safety.

Here in Albuquerque, New Mexico there are serious concerns about the safety of women entering into abortion clinics who think they will receive adequate healthcare only to be transported to the emergency room after serious life-threatening injuries suffered by the hands of abortionists. In the past four years alone in New Mexico, 14 women have been rushed to local hospitals with severe life-threatening injuries due to botched abortions. In addition, late-term abortionist Shelley Sella faced a New Mexico Medical Board hearing after a woman suffered a ruptured uterus during a 35 week full term abortion. This was a violation of the standard of care. To make matters worse, no abortion clinic in New Mexico is ever inspected by the health department.

These re-occurring incidents should have women in America asking, “Can we trust Planned Parenthood or abortion clinics in general, with our healthcare?”

According to Bud Shaver, spokesperson for Project Defending Life, “Pro-Choice bias and willful ignorance to the fact that women continue to be injured in abortion clinics has permeated New Mexico and this country. Unfortunately, this mentality has penetrated not only the legislature in Santa Fe but also other public oversight entities and is perpetuating harm to unsuspecting women entering abortion clinics every day. It is time for the Pro-Choice reign of terror across this country, to come to come an end!”

In New Mexico, we know that the health department, hospitals, and even high schools send unsuspecting women to Planned Parenthood and other abortion clinics to receive healthcare services. Women are continually referred to abortion clinics for D&C’s after their miscarriages, sterilizations and birth control. New Mexico is one of 15 states where all of these services, including abortion, are fully funded through Medicaid by taxpayers. When abortion clinic workers maim and injure these women they make each one of us culpable.

In light of all these tragic developments, Father Stephen Imbarrato, Director of Project Defending life issued the following statement, “Between the fourteen 911 calls obtained by Project Defending Life and this latest proof of medical negligence at Planned Parenthood, the women of New Mexico can see that an abortion clinic will not provide them with the essential health care they deserve. They may in fact be walking into a serious life threatening situation. I am calling on Susana Martinez and the New Mexico Legislature to immediately end tax funding to Planned Parenthood and all of New Mexico’s abortion clinics. We also want to see policies implemented guaranteeing that abortion clinics are inspected regularly. All other surgical centers in this state are inspected regularly, we need to hold abortion clinics to the same standard. Women in this state need immediate action, not a double standard which places their health and safety at risk.”