Germantown, MD – An ambulance transported a female patient of late-term abortionist LeRoy Carhart to a Germantown hospital on the evening of January 19, 2016, about a month after another similar incident that also resulted in emergency hospitalization of another of his patients.

Security camera footage obtained by Operation Rescue shows an ambulance arriving at Germantown Reproductive Health Services in Germantown, Maryland at approximately 7:46 p.m. according to the video time-stamp. Seven minutes later, emergency responders are seen leaving the late-term abortion facility with the injured women on a gurney.

Carhart and his wife, Mary Lou, are also seen exiting the abortion facility and leaving the parking lot immediately after the ambulance. 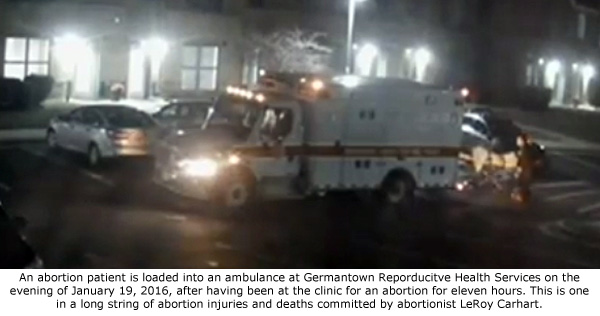 Carhart has not held hospital privileges anywhere, including Maryland, since 1982.

Carhart conducts abortions throughout all nine months of pregnancy at Germantown Reproductive Health Services where he has worked for the past five years. Carhart also operates his own abortion facility in Bellevue, Nebraska, where state law limits abortions to under 20 weeks.

A witness on the scene has told Operation Rescue that on January 19, Carhart saw 21 patients. Seven of those were risky late-term abortion deliveries.

The patient that was transported was said to have been the first patient to arrive for the day and the last to leave eleven hours later – long after everyone else had been released.

This is the sixth medical emergency that has resulted in the hospitalization of a Carhart abortion patient since he began working in Maryland five years ago. One of those incidents resulted in the death of Jennifer Morbelli, who succumbed on Feburary 7, 2012, to complications of a 33-week abortion. Even though Carhart was unable to be contacted as Morbelli’s condition worsened, which fatally delayed emergency Carhart was never held accountable.

Carhart was also involved in the death of another late-term abortion patient, Christin Gilbert, a 19-year old Down syndrome teen who died from complications to a botched third trimester abortion on January 13, 2005.

“When Carhart moved his late-term abortion business to Germantown, we predicted he would kill again, and that prediction came true. Now he has hospitalized two women within a month of each other and we do not know if either woman is alive or dead,” said Operation Rescue President Troy Newman. “Carhart is a dangerous abortionist that has maimed and killed enough. We urgently call on the Maryland Board of Physicians to step in and stop Carhart from practicing in Maryland before he kills again.”

Earlier this week, Operation Rescue named Carhart’s Germantown Reproductive Health Services as one of the six most dangerous abortion business in the U.S.