Germantown, MD — An African-American patient of the notorious late-term abortionist LeRoy Carhart, 72, was transported to the hospital after suffering a medical emergency at Germantown Reproductive Health Services in Germantown, Maryland, on Wednesday, July 2, 2014.

This represents the EIGHTH known medical emergency for which Carhart has been responsible since March, 2012. The recently injured women include Jennifer Morbelli, who died on Feb. 7, 2013. 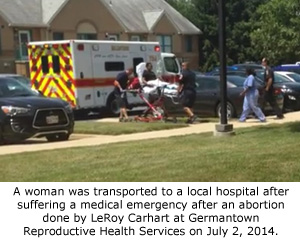 “Medical emergencies at Carhart’s two abortion locations are becoming more frequent. His age and grueling travel schedule compound the risks to women, who are paying for his mistakes with their health and sometimes their lives,” said Troy Newman, President of Operation Rescue. “Our complaints in Maryland are falling on deaf ears while woman after woman is transported to emergency rooms where Carhart isn’t even allowed to enter. The public safety emergency created by Carhart’s shoddy practices has reached crisis proportions.”

Multiple complaints have been filed with the Maryland Board of Physicians. The most recent asked the MDBP to take a fresh look at Carhart in light of the previous seven medical emergencies. Nearly identical complaints were filed simultaneously with medical boards in Nebraska and Indiana, where he also has operated.

Take Action to Protect Women and Their Babies!

Since Carhart’s abortion business affects women all over the nation who go to him for extremely late abortions that are illegal in most states, Operation Rescue is asking the public to contact the Maryland Board of Physicians and demand an honest and thorough investigation into Carhart’s abortion practices that are increasingly endangering the lives of women.