Not much else is yet known about the condition of that woman, however, Operation Rescue has obtained the 911 recording for a previous medical emergency on January 19, 2016, that took place at Germantown Reproductive Health Services, the late-term abortion facility were Carhart aborts babies throughout all nine months of pregnancy.

On the recording, a cheery clinic worker is heard asking for transport for a patient for observation, downplaying the seriousness of the injuries, which become apparent later in the call.

While heavily redacted, it is clear from the questioning of the dispatcher that the victim was likely a late-term abortion patient who was hemorrhaging, and may have been bleeding from the mouth. If that was the case, it means she likely suffered serious internal injuries as the result of the abortion.

The following portion of the recording is especially revealing.

911: Is she bleeding or vomiting blood?
[Answer redacted.]

911: …ok, and has the afterbirth been delivered yet? The bleeding’s serious.
[Answer redacted.]

The video shows that as the woman was transported from GRHS, Carhart and his wife, Mary Lou, are seen leaving the facility with their luggage and exit the parking lot in the opposite direction as the ambulance.

Carhart has no hospital privileges anywhere, and hasn’t since 1982.

“It’s possible that the Carhart’s had a flight to catch so they just dumped their seriously bleeding patient on the emergency room,” said Operation Rescue President Troy Newman. “This means he would probably not been available in the event emergency room personnel had questions about the injured patient’s care.”

Carhart similarly caught a plane and was unavailable when another late-term patient, Jennifer Morbelli, suffered complications to a 33-week abortion and later died at a hospital where her desperate family took her for care. 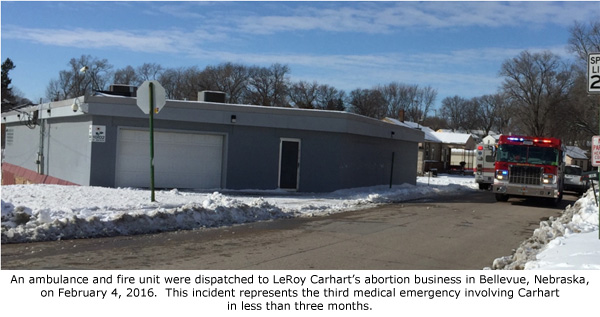 The January 19 injury in Maryland and the February 4 emergency in Nebraska combine for a total of eleven medical emergencies documented by Operation Rescue since 2012.

“It is clear that Carhart poses a danger to the public and it is past time for the authorities in Maryland and Nebraska to stop turning a blind eye to this carnage,” said Newman. “Once again, we will be filing complaints with medical boards in both states, and will continue to do so when these incidents happen until they finally understand just how dangerous he really is.”