Madison, WI – Emergency radio traffic has revealed important information about what happened to an asthmatic Planned Parenthood patient who was transported to the hospital from the group’s Madison, Wisconsin, abortion facility on August 9, 2016 – information that someone inside the city government did not want anyone to know.

After the medical emergency was first reported by local pro-life activist Dan Miller, Operation Rescue placed a Freedom of Information Request for the 911 call records. The Dane County Public Safety Communications office released an audio file of the call and the CAD Incident Detail Report, but both were so heavily redacted that there was no way to determine what the medical emergency was about.

However, once Operation Rescue reviewed raw radio traffic that it obtained apart from the Public Safety Communications office, it became obvious that something was amiss.

Despite a clear record in the heavily redacted CAD report, which showed Medic Unit 8 was dispatched at 11:42 a.m., there was no record in the Fire Department radio traffic that any units had been dispatched to Planned Parenthood.

“It appears that not only were the records we asked for redacted, but attempts were made to erase any mention of the incident from the radio traffic recordings as well,” said Troy Newman, President of Operation Rescue. “Someone obviously went to a lot of trouble to conceal the truth from the public about the dangers women face during abortions at Planned Parenthood.”

However, careful sleuthing by Operation Rescue’s staff uncovered a brief recording on another radio stream that told the story.

At 11:59 a.m., a responder from Medic Unit 8 radioed a hospital to describe the condition of a patient he was transporting to the emergency room.

“There’s about a liter and a half of blood loss,” he began. “She was hypotensive and tachycardic at the clinic there.”

In layman’s terms, the hemorrhaging patient had low blood pressure, presumably from the heavy blood loss, and as a result, her heart began to beat faster than normal.

The abortion facility had established an IV and pumped about 400 ccs of fluid into her, which is the equivalent to just over 13.5 ounces — a long way from the 1.5 liters (nearly 51 ounces) of blood she had lost.

As the ambulance sped toward the unnamed hospital, the woman’s heartbeat was still a bit high at 102 beats per minute, but her blood pressure had stabilized. The patient was also asthmatic, which was preventing full oxygenation.

The responder concluded his report saying, “See you in about ten minutes. Are there any questions?”

Hearing no questions, Medic 8 signed off.

The CAD report noted that the ambulance arrived at the hospital at 12:10 p.m., just about 10 minutes after the radio report on the patient’s condition – just as the responder indicated. 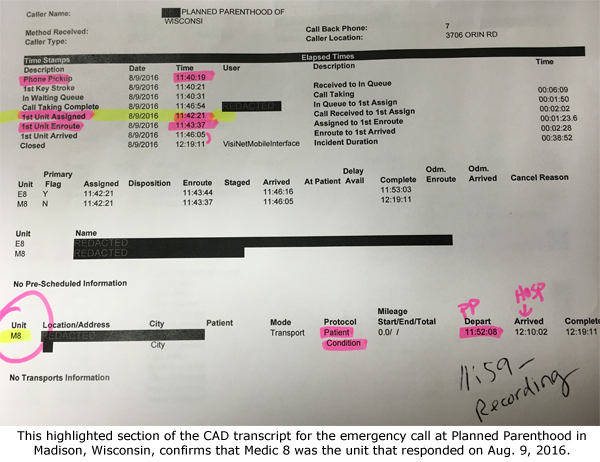 “Whoever is over-redacting public information from the records and covering up for Planned Parenthood is only creating an even more dangerous environment for women, who are denied access to information about the risks they face,” said Newman. “With county workers shamefully shielding Planned Parenthood, they remain unaccountable and free to continue their shoddy practices without worry of being caught. This only ensures that more woman will continue to be injured by Planned Parenthood.”

The August 4th injury was the fourth documented at the Madison Planned Parenthood abortion facility in the past three years. (Read about the others.)