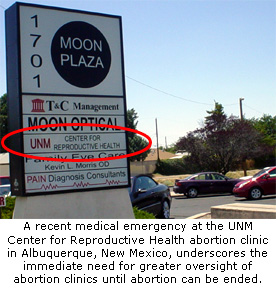 Albuquerque, MN – Operation Rescue has released a newly obtained recording of a 911 call placed from the UNM Center for Reproductive Health (UNMCRH) that contains dramatic audio of a 35-year old woman “crashing” after being given “conscious sedation” during an abortion that took place on February 15, 2011.

Voices can be heard in the recording calling the patient’s name and urging her to breathe as she groans and gasps for air.

“We have a patient who is crashing right now,” the caller told the dispatcher. At the dispatcher’s request, the call was transferred to the abortion room where another clinic worker described the patient as “grayish” in color. Once the call was transferred, the disturbing sounds of the patient’s suffering and struggling for life became clearly evident.

The fate of the woman is unknown.

“This 911 call is evidence that there is no such thing as a ‘safe’ abortion. It emphasizes the need to end this grisly practice. Until it can be ended, this patient’s suffering graphically illustrates the need for more accountability and oversight for abortion clinics around the nation,” said Newman.

“New Mexico has virtually no laws regulating abortion, so this is the kind of thing that one can expect. Abortion clinics fight safety laws because they don’t want inspectors to know the truth about what really goes on behind their closed doors. The 911 call released today gives us a window into that world and it’s not a pretty sight.”

The UNMCRH is an abortion clinic operated by the University of New Mexico School of Medicine, which is a public funded institution. Residents in the program are rotated through the abortion clinic for training. If residents opt out of abortion training, they are assigned other tasks at the clinic.

UNMCRH offers abortions up to 22 weeks gestation and is yet another troubled member of the National Abortion Federation, a national affiliation of abortion clinics that has a particularly abysmal health and safety record.

“This is more proof that the abortion industry is incapable if regulating itself. NAF standards are a joke. States need to get serious about protecting the safety of women,” said Newman.

Bud and Tara Shaver of Defend Life have announced that today they have opened a new pregnancy resource center across from the UNMCRH in order to better assist women and help spare them from the trauma and tragedy experienced by the patient that was the subject of the recent 911 call. The Shavers are former interns for Operation Rescue and obtained the 911 recording through an open records act request.