You are here: Home / Abortion911 / Emergency Transport from Planned Parenthood Makes Another Case for Defunding 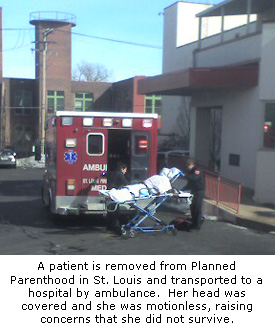 St. Louis, MO — Emergency responders removed a patient from a Planned Parenthood abortion clinic in St. Louis, Missouri, on Saturday morning and rushed her to the emergency room at Barnes-Jewish-Christian Hospital.

A witness, pro-life sidewalk counselor Marty Bennet, took over a dozen photos of the dramatic incident as the woman was wheeled out the clinic and into an awaiting ambulance. Photos showed that the woman’s head was covered and that there was no IV bag or any other sign of ongoing emergency care. There was no evidence that any Planned Parenthood staff member accompanied her to the hospital.

Bennet left a note offering assistance on the vehicle that accompanied the ambulance to the hospital. Later, the husband of the botched abortion victim contacted him to thank him for his concerns. He indicated that his wife is in stable condition.

“From June 2009 until April 2010, nine ambulances have been at Planned Parenthood and each time a client was transported to Barnes Hospital,” said Bennet in a written statement. “Is this safe medical care?”

News of this tragic incident comes on the same day that pro-life supporters around the nation will be gathering for protests at Planned Parenthood offices in over 130 cities to ask for an end to tax-funding for the abortion giant.

“This incident in St. Louis only underscores the dangers of abortion mills in America, which all too often operate without accountability or oversight,” said Operation Rescue President Troy Newman. “Our tax money should not be used to prop up shady and dangerous abortion businesses that prey on the vulnerable and act as if they are above the law.”

Planned Parenthood is facing several embarrassing scandals that have served to discredit it, including:

• Planned Parenthood groups in Maryland, New Jersey, and Virginia were recently caught on tape during a Live Action Films undercover sting showing a willingness to cover up for sex trafficking.

“There is no doubt that Planned Parenthood makes huge amounts of money providing services that endanger women,” said Newman. “It’s time for Americans to stop further lining their pockets with our hard-earned tax dollars.”