Germantown, MD – For at least the fifth time since LeRoy Carhart located his late-term abortion business to Maryland, one of his abortion patients has been rushed to a hospital emergency room by ambulance.

On December 15, 2015, the Maryland Coalition for Life reports that Carhart, who is nationally known for being one of the few abortion providers to conduct third trimester elective abortions, accompanied a patient in the ambulance as she was rushed away to receive emergency help for what appeared to be an abortion-related emergency.

The Coalition provided video of the incident to Operation Rescue.

“Carhart continues to endanger women while the authorities in Maryland look the other way. We are concerned for the woman who was transported to the hospital and can only wonder how many women must suffer injury or death until Carhart’s medical license is revoked,” said Newman.

Earlier this year, while another of Carhart’s patients was being loaded into an awaiting ambulance, a videographer was assaulted by abortion activists working for Carhart as she attempted to document that incident.

Learn more about Carhart and his dangerous abortion practices at AbortionDocs.org. 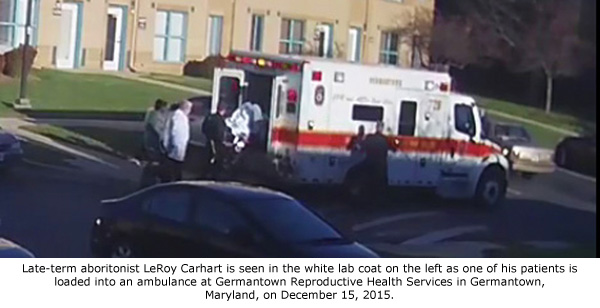