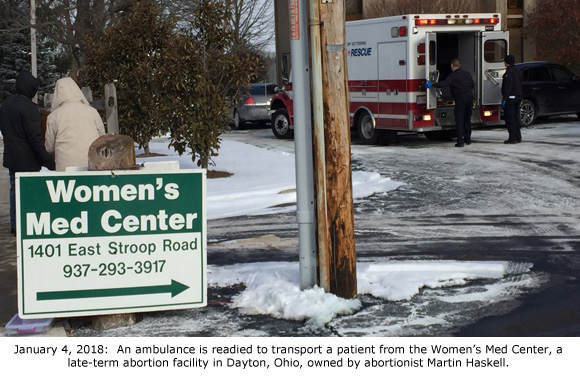 Dayton, OH – For the first time in 2018, pro-life activists in Dayton, Ohio, have reported that an ambulance arrived at the Women’s Med Center abortion facility in Dayton, Ohio, to transport a patient to the hospital.

The incident took place on Thursday, January 4, 2018, shortly before noon, and was photographed by multiple pro-life activists who shared their pictures with Operation Rescue.

“It is tragic that just four days into the New Year, we see yet another woman injured by abortion,” said Troy Newman, President of Operation Rescue. “We are dedicated to praying and working toward the day when babies and their mothers are protected from the barbarity of abortion.”

The Women’s Med Center is a late-term abortion facility owned by the nationally-known abortionist Martin Haskell, who claims credit for having invented the now-outlawed “Partial Birth Abortion” procedure.

The Ohio Department of Health (ODH) has been working since 2015 to close the Women’s Med Center for failing to provide an acceptable hospital transfer agreement. Neither Haskell nor any of his staff abortionists qualify for hospital privileges and sought a variance using a transfer agreement. That case continues to slowly wind its way through the courts.

In August 2016, the Women’s Med Center stirred controversy when it aborted a late-term pregnancy on a 31-year old woman who was so impaired by an overdose of street drugs that she could not give her consent. Despite the outcry against the forced abortion, no action was ever taken against the facility.

A recent undercover phone call made during an investigation into late-term abortion facilities by Abortion Free New Mexico and Priests for Life, revealed that the Women’s Med Center was willing to abort healthy babies through 21 weeks, 6 days of pregnancy. No medical reason was required.

However, the abortion facility’s website indicates they do conduct abortions for “fetal indication” upon referral. Abortions done when it is suspected that the baby is not perfect are known to be done throughout all nine months of pregnancy.

As for Thursday’s emergency, the condition of the woman is unknown at this time. Watch for follow up reports.