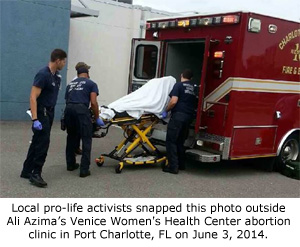 Port Charlotte, FL — An ambulance as called to the Venice Women’s Health Center in Port Charlotte, Florida, last week to transport an abortion patient to the hospital for emergency care.

The patient, who was described as a Caucasian woman in her early 30’s, was removed from the abortion clinic completely covered with a blanket on June 3, 2014. Pro-life activists who witnessed the incident told Operation Rescue that one of the emergency medical technicians who responded to the abortion business’ call for emergency assistance indicated that the patient was going to be “okay.”

“Certainly there are degrees of ‘okay’ and this doesn’t negate the fact that the patient suffered from a serious complication that could not be handled at the clinic,” said Operation Rescue President Troy Newman.

Pro-life sidewalk counselors also noted that another abortion patient was seen earlier in the day leaving the clinic in poor condition and unable to walk on her own. No clinic staff assisted as that woman was held up by a male companion who helped her into a car. She appeared to be in significant pain, and left the scene fully reclined in her seat.

The abortion business is owned and operated by abortionist Ali Azima, who has operated in the Ft. Myers/Port Charlotte area for over 30 years.

The Venice Women’s Health Center was involved in an incident in 2012, where Azima allegedly began a late-term abortion there even though the facility wasn’t licensed for those procedures. The patient was referred to Azima’s other clinic, the Southwestern Florida Women’s Clinic (SFWC) in Ft. Myers, where the abortion was completed. A citation was issued to the SFWC over the incident.

SFWC was also cited in 2012 for multiple health and safety violations. A deficiency report indicated that the autoclave was not being properly cleaned, which made it impossible to properly sterilize surgical instruments. Inspectors also found that first trimester surgical abortion practices fell below the standard of care for such procedures. A secondary inspection found that the facility was still not in compliance with autoclave sterilization protocols. 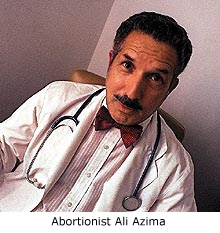 In 1985, Azima had his medical license suspended for one year and was placed on probation for three years after a Florida Medical Board inquiry found that Azima failed to take a medical history or properly examine an abortion patient, prior to an abortion, then failed to have a pathologists examine the remains to ensure that everything had been removed. Without examining her, Azima continued to insist during subsequent visits with the patient that she was not pregnant. The woman eventually suffered a ruptured ectopic pregnancy that caused her to undergo emergency surgery and hospitalization.

“Once again, we have a woman who walked into a troubled abortion business only to be carried out on a gurney,” said Newman. “Azima and his troubles are all-too-typical of abortion providers in America today and is a case in point for tighter oversight and regulation of the abortion cartel. Instead, abortionists like Azima resist laws to protect women because they know their shoddy abortion operations are incapable of meeting acceptable medical standards and practices.”

Operation Rescue has used official abortion statistics in several states to document the fact that when abortion clinics like Azima’s close, the number of abortions is reduced.

“We urge Florida to enact regulations such as those passed last year in Texas,” said Newman. “If we can pass rules that will save lives now and spare women from suffering live-threatening injuries, it is our moral duty to do so.”