Cleveland, Ohio – Operation Rescue has just obtained a 911 recording of an emergency call placed from the Cleveland Surgi-Center last September that details horrific abortion complications suffered by a woman who was said to be only sporadically breathing and whose lips were turning blue.

According to an employee of the Cleveland Surgi-Center that first placed the call on September 14, 2013, the 24 year-old woman had a history of seizure disorders for which she was taking the medication Depakote. The woman began to experience seizures after the abortion procedure. 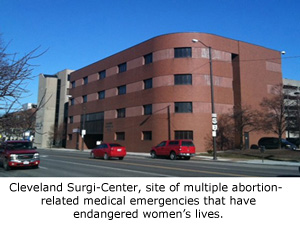 “This abortion clinic is not equipped to handle life-threatening complications that can be expected with high-risk patients like the one who was the subject of this 911 call,” said Troy Newman, President of Operation Rescue. “It appears that giving this patient an abortion, knowing that it could bring on seizures for which they were unprepared to cope, was negligent and placed financial gain above the welfare of the patient.”

“I have a patient here that we just – uh – she’s had an abortion. She has a seizure disorder. Uh, when she was waking up, she seems to be in tonic-clonic, her lips are blue, she’s having difficulty breathing – she’s non-responsive,” stated the abortion “nurse.”

The term “tonic-clonic” refers to a state of seizure that involves muscle contractions. Blue lips are usually an indication of hypoxia, or oxygen deprivation.

A portion of the call transcript raises questions about whether or not the patient survived her ordeal and if she did survive, whether she suffered brain damage.

“We are asking the Ohio Medical Board to investigate this incident and to take whatever steps are necessary to protect the public from aging abortionists who appear to be playing ‘Russian Roulette” with the lives of high-risk patients,” said Newman.

Abortionists at the Cleveland Surgi-Center include 87 year-old Lee I. Rubinstein and Mohammad Hassan Rezaee, a 79 year-old native of Iran. Rezaee had a history of medical malpractice lawsuits.

This is the second known medical emergency documented by Operation Rescue at the Cleveland Surgi-Center. A previous incident took place on December 1, 2012, when a patient had passed out and was turning pale from apparent blood loss.

Read the written transcript of the 911 Call.