Houston, Texas – By now abortionists around the nation are well aware that Operation Rescue and other pro-life organizations are accessing public 911 records to verify and document abortion-related medical emergencies that are often witnessed by street activists outside American abortion clinics.

In some instances, abortion clinics have resorted to using private ambulance services that are not subject to open records laws. Others have pressured county records officials to over-redact public information in order to hide the seriousness of all-too-common abortion-related emergencies from the public.

In extreme situations, abortionists even have been known to violate patient care standards by transporting women suffering life-threatening abortion complications to emergency rooms using private vehicles so as not to draw attention to their latest medical mishaps.

However, in Texas, the monolithic Planned Parenthood abortion clinic in Houston recently resorted to new tactics to obfuscate the severity of an abortion-related medical emergency and confuse anyone who might access the 911 record.

During a call to 911 placed on December, 14, 2013, from the towering Houston Planned Parenthood abortion clinic on Gulf Freeway, the caller is heard using medical abbreviations and “shorthand” terminology to conceal the fact that an abortion patient was suffering uncontrolled bleeding and heavy blood loss.

But the tactic backfired and served only to confuse the dispatcher and delay emergency care to the hemorrhaging abortion patient, who was eventually transported to Ben Taub Hospital in Houston.

Listen to the full 911 recording.

This transcribed excerpt is revealing of the lengths to which Planned Parenthood will go to conceal the fact that its abortionists are hurting women:

Dispatcher: Okay, what does that mean?

Dispatcher: What does that mean?

Planned Parenthood Caller: — With an EBL of 500.

Planned Parenthood Caller: And she has no drug allergies.

Dispatcher: But she needs to go to Ben Taub — why?

Planned Parenthood Caller: Because she’s having some, um, bleeding that we can’t control. 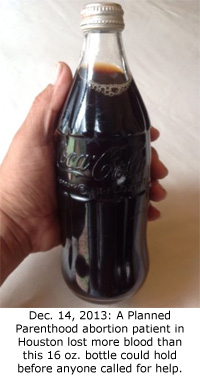 It took a long two minutes and six seconds into the 911 call before the dispatcher finally understood why the Planned Parenthood worker had called.

To translate, Planned Parenthood had just completed an abortion on a patient who was essentially hemorrhaging and had already lost 500 milliliters of blood in a relatively short time. The abortionist on duty could not control the bleeding, so they requested emergency transport from Planned Parenthood (an ASC or Ambulatory Surgical Center) to the hospital.

Just to give an idea of how much 500 ml of blood is in terms of American measures, she had lost approximately 17 ounces of blood – about half of the allowable blood loss for an average-sized woman undergoing surgery.

“If Planned Parenthood thinks their ‘insider lingo’ will outsmart us, they completely underestimate the Pro-life movement. This kind of nonsense is actually endangering the lives of women and delaying their access to emergency care when every minute might mean the difference between life and death,” said Operation Rescue President Troy Newman. “It just goes to show that for Planned Parenthood, covering up their mistakes takes priority over the lives and health of women.”

Read about other abortion emergencies at this Planned Parenthood in Houston.