You are here: Home / Abortion911 / Houston, We Have a Problem: Planned Parenthood Rips Hole in Woman’s Uterus During Abortion

Houston, TX – Contrary to claims by the abortion lobby that abortion is safe that that such complications as uterine perforations are extremely rare, Operation Rescue continues to compile evidence to the contrary.

A 911 call placed on February 6, 2015, from a Planned Parenthood abortion facility in Houston, Texas, reveals yet another botched abortion that resulted in a life-threatening medical emergency that required transport to a local hospital to treat injuries for which the Planned Parenthood facility was not equipped. 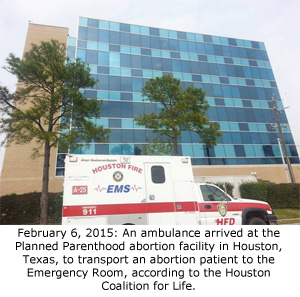 According to the 911 call, the patient suffered a “perforation,” meaning that the sharp plastic tube used to suction out the parts of the pre-born baby was pushed in too far and tore a hole in the uterus. This kind of injury can cause hemorrhaging, bowel injury requiring surgery, and even death, as was the case with 22-year old Tonya Reaves, who died at a Planned Parenthood in Chicago in 2012 after abortionist Mandy Gittler perforated her uterus and left her bleeding for over five hours before calling for help.

So far in 2015, Operation Rescue has documented 14 medical emergencies at abortion clinics around the nation, a number that Newman considers only the “tip of the iceberg.” Most medical emergencies are reported by pro-life activists who witness them, but so many more take place outside the watchful eye of pro-life supporters. This makes the compilation of accurate abortion complication statistics nearly impossible, especially in light of the fact that abortionists are notorious under-reporters.

Operation Rescue has most recently documented the following cases of uterine perforations during abortions:

Pensacola, Florida, February 19, 2015: A 29- year old patient suffered uncontrolled hemorrhage that was likely the result of a uterine perforation by an abortionist operating at an abortion facility owned by the notorious New Jersey abortionist Steven Chase Brigham.

Akron, Ohio, February 7, 2015: An abortionist tore a hole in the uterus of a 26-year old abortion patient. That facility contacted the ambulance company directly instead of dialing 911 for a quicker response.

Salem Oregon, November 14, 2014: Abortionist Valerie King perforated the uterus of 21-year old college student at a Planned Parenthood facility. The patient has to be transported to a hospital in a nearby city.

“When women walk into an abortion facility, there is never a guarantee that they will walk out,” said Newman. “Our prayer for abortion-vulnerable women is that they will take advantage of the many pregnancy help centers that offer practical assistance and a system of support for pregnant women. That could be a decision that will literally save their lives as well as the lives of their babies.”