You are here: Home / Abortion911 / In Wake of Abortion Death, Groups Call for Revocation Of Maryland Abortionist’s License 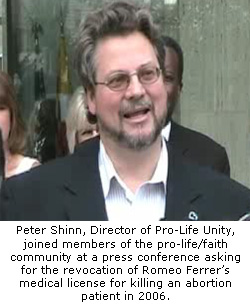 Baltimore, MD – Pro-Life groups are calling for the Maryland Board of Physicians (MBP) to revoke the medical license of abortionist Romeo Ferrer at a disciplinary hearing tomorrow concerning the abortion death of a woman in 2006.

“It is shocking that this abortionist has been allowed to continue endangering women for four years while the fact that he killed one of his patients was concealed from the public,” said Operation Rescue President Troy Newman. “We urge the Maryland Board of Physicians to act decisively tomorrow to protect women from further harm by revoking Ferrer’s medical license.”

On February 3, 2006, a 21-year old African American woman went to Gynecare Center for a second trimester dilation and evacuation abortion by Romeo Ferrer. According to the petition filed by the MBP, the patient was overdosed on pain-killing narcotics. She was not properly monitored and appropriate emergency protocols were not followed. This negligence resulted in the patient’s death, which was only recently discovered by local pro-life groups.

A disciplinary hearing has been scheduled for June 2, 2010, at 10:00 AM. Members of the pro-life/pro-faith community held a press conference outside MBP offices in Baltimore this morning to make the abortion death public and call for the revocation of Ferrer’s license. The event was organized by Defend Life.

Unfortunately, this incident was not Ferrer’s first brush with the law. Operation Rescue uncovered disciplinary documents that show a pattern of misdeeds that date back over 20 years. In 1992, Ferrer was disciplined for his incompetence that involved botched abortions and other surgical procedures, including an incident where he knowingly sewed a metal surgical instrument into a patient.

“We urge those who are concerned about the health and welfare of women to contact the Maryland Board of Physicians and ask that they revoke Ferrer’s license and close his abortion clinic,” said Newman. “The Board needs to know that people are watching the outcome of this hearing so that it does not simply become another incident that is swept under the rug. The poor woman who died from Ferrer’s negligence deserves better than that.”