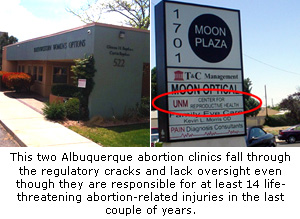 Albuquerque, New Mexico – A shocking number of medical emergencies at two Albuquerque abortion clinics over the past few months have raised questions about clinic safety and who is responsible for oversight. After months of investigation, pro-life groups have determined that abortion clinics often operate in regulatory gaps and actively seek to “fly under the radar,” as one regulator put it. This has created a public safety crisis in New Mexico.

A total of 14 calls for emergency medical assistance were placed to 911 dispatchers by Southwestern Women’s Options (SWO) and the University of New Mexico Center for Reproductive Health (UNMCRH) over a 35-month time frame between November, 2008, and September, 2011. Three were placed from the UNMCRH while, alarmingly, eleven of the calls for help originated from SWO.

“That means trash could be piled to the ceiling inside those clinics, and the NMMB would not have the authority to do anything about it,” said Troy Newman, President of Operation Rescue and Pro-Life Nation. “The clinics themselves are never inspected or held to any standard. That creates the potential for a Gosnell-like ‘house of horrors’ to operate directly under the nose of regulators.”

Southwestern Women’s Options, an abortion clinic specializing in risky late-term procedures, is not licensed as an Ambulatory Surgical Center, which would ensure that the clinic was inspected and met the same standards that other out-patient surgical centers much maintain. Instead, it is listed as a “Doctor’s Office” under the name of the 75-year old owner of the facility, Curtis Boyd, a Texas abortionist who admits to having done illegal “back-alley” abortions prior to Roe v. Wade. This designation qualifies him for a license exemption.

Boyd’s clinic conducts a minimal amount of lab work and is licensed in New Mexico as a laboratory. The most recent inspection survey issued in 2009 for the SWO lab showed multiple violations with faulty test results detected for pregnancy and for the Rh factor that resulted in the need to contact patients with the news that they needed to have their tests redone. (Read full list of violations)

While every two years, the laboratory portion of his business is inspected by the Department of Health, the surgical side of the business has never been inspected. No one has ever checked to see if Boyd owns a crash cart, has emergency protocols in place, or even if he bothers to sterilize his surgical instruments.

According to Rick Pangborn, Medical Care Program Director with the Department of Health, clinics that must be licensed as Ambulatory Surgical Centers are those with an operating room that accommodates outpatient surgical procedures, which require post-surgical monitoring of patients in a separate recovery room.

However, Pangborn emphasized that even though Boyd’s SWO meets those criteria, abortions are among the few procedures that cannot trigger the need for an Ambulatory Surgical Center license in New Mexico.

“This clinic operates in the shadowy gap created by an extremely compartmentalized regulatory system in New Mexico,” said Tara Shaver of Project Defending Life. “Each regulatory agency is only responsible for a small portion oversight, and abortion procedures seem to give clinics special exemption from oversight. Abortion clinics can easily fly under the radar by claiming to be doctor’s offices. This designation ensures that they are never inspected or regulated. Maybe that is why we are seeing life-threatening medical emergencies at these clinics at the rate of one every couple of months.”

UNMCRH Completely “Under the Radar”

According to Pangborn, there is no record at all of any kind of license for the UNM Center for Reproductive Health, the other abortion clinic that has experienced a recent series of medical emergencies. There is no record of UNMCRH ever having been inspected by any state regulator. Pangborn told Shaver that he was under the impression that UNMCRH provided different services than Southwestern Women’s Options, when both are in fact primarily abortion clinics.

Planned Parenthood is the only clinic in Albuquerque with no record of 911 calls. It is licensed as a Diagnostic Treatment Facility, which provides for the clinic to bill insurance and Medicaid for services even though they were not supplied by a licensed physician. Planned Parenthood is not required to meet the standards that Ambulatory Surgical Centers must meet.

“If clinics are not required to meet specific health and safety standards, they usually don’t,” said Newman. “New Mexico’s lack of standards for abortion clinics has created a dangerous climate where women can be subjected to any manner of substandard or negligent practices and can never be held accountable for it. Fourteen women — that we are aware of — have paid for this lack of oversight with serious bodily injury and it is only a matter of time before one pays for it with her life.”

Tara Shaver agreed. “The fourteen 911 calls that we uncovered show that something is seriously wrong with how abortion clinics in New Mexico operate and the lack of oversight,” she said. “We now have information that the UNMCRH is no longer calling 911 for medical emergencies so that there is no public record of how many injuries are actually occurring there. This places women at additional risk. Something must change on the state level in order to protect women from these abortion clinics that have run amok outside the bounds of any kind of regulatory oversight.”