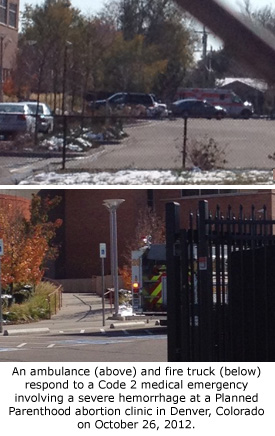 Denver, Colorado – An ambulance was called to a Planned Parenthood abortion clinic in Denver, Colorado, on October 26, 2012, and transported a hemorrhaging woman to a local hospital, according to a 911 Computer Aided Dispatch Transcript released to Operation Rescue by local pro-life activists.

The incident is the sixteenth medical emergency documented by Operation Rescue since January, 2011.

President Obama has taken criticism for continuing his support for tax-funding of Planned Parenthood, in the wake of numerous abortion-related emergencies, including the avoidable death of Tonya Reaves in July at a Chicago area Planned Parenthood clinic.

“It is unconscionable that our tax dollars are propping up this dangerous chain of abortion clinics at the cost of hundreds of millions of dollars per year,” said Cheryl Sullenger, Operation Rescue’s Senior Policy Advisor. “In order to protect women, we must defeat Obama and his pro-abortion policies, before we see more of these kinds of tragedies.”

In Denver, the heavily redacted CAD Transcript indicates that a woman was transported from Planned Parenthood using Code 2, which denotes a serious, but not immediately life-threatening condition. The transcript used medical codes that indicated the woman suffered a severe hemorrhage related to an ectopic pregnancy. (View Document)

“Based on the information we have, it appears that a woman was bleeding heavily after an abortion when it was discovered that her pregnancy was actually in her fallopian tube. The ectopic pregnancy likely ruptured, causing a life-threatening condition for the woman,” said Sullenger. “It is a matter of gross negligence to do an abortion on a woman without conducting a manual pelvic exam, which would have revealed the woman’s true condition. We know from our research of abortion abuses over the years that this kind of negligence is common at abortion clinics across the nation.

Operation Rescue recently reported on a law suit filed against Planned Parenthood in Birmingham, Alabama, where a woman suffered from a ruptured ectopic pregnancy after an unwarranted abortion. Operation Rescue filed a formal complaint against the abortionist responsible in that case.

Operation Rescue released a video on October 19, 2012, with photos and 911 recordings documenting 14 such medical emergencies at Planned Parenthood clinics over the past 22 months. Since then, in addition to the Colorado incident, one other medical emergency has surfaced, this time at a Planned Parenthood abortion clinic in Hempstead, New York, which took place in March, 2012.