You are here: Home / Abortion911 / Menace Continues: Another Carhart Late-term Abortion Patient Rushed Away by Ambulance

Germantown, MD – An ambulance arrived at Germantown Reproductive Health Services in Maryland on Wednesday, March 30, 2016, and transported yet another abortion patient of LeRoy Carhart’s to an unknown location.

The incident was captured on video by security cameras at Germantown Pregnancy Choices, a pro-life pregnancy help center across the parking lot from the notorious late-term abortion facility.

During the most recent incident, witnesses tell Operation Rescue that the patient who was taken away by ambulance was in her fourth day of a late-term procedure.

Carhart, who resides in Nebraska, conducts risk-filled third trimester abortions at Germantown Reproductive Health Services. Patients that are over 27 weeks pregnant will receive a shot through the abdomen of a drug that is meant to cause the demise of the pre-born baby on their first visit. Subsequent daily visits prepare the woman for labor and delivery of her dead baby, which usually takes place on day three or four. 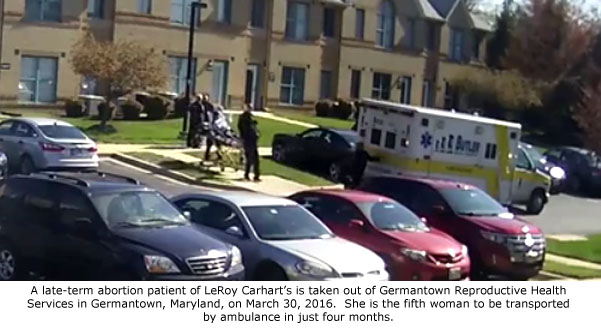 The March 30 episode represents the fifth Carhart abortion patient in four months to be transported by ambulance from GRHS.

“With the increased frequency of serious medical emergencies related to abortions done by LeRoy Carhart, we call on the Maryland Board of Physicians to suspend his Maryland medical license on an emergency basis until a full investigation into Carhart’s competency can be completed,” said Operation Rescue President Troy Newman.