You are here: Home / Abortion911 / Miscarriage or Worse? What Really Happened At Cherry Hill Women’s Center? 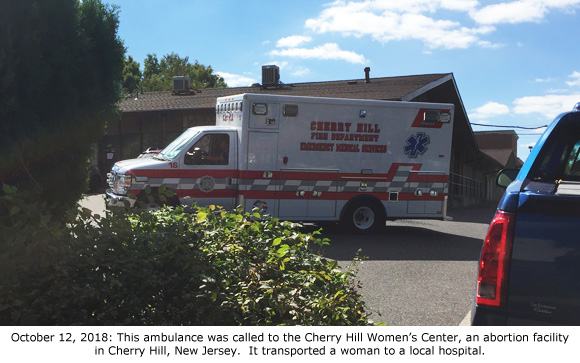 According to Claire Howso, a group of Christians were praying during a 40 Days for Life vigil when the ambulance arrived and was directed to the rear of the building by clinic security. Some pro-life activists repositioned themselves and witnessed a woman on a gurney being loaded into the ambulance.

Operation Rescue obtained a recording of radio traffic dispatching an ambulance to the abortion facility for a woman who was “miscarrying.” It is possible the facility used the term “miscarrying” to downplay the fact that the Cherry Hill Women’s Center is a full time, high volume abortion clinic, and that abortion is the only medical service offered there.

“Women who are naturally miscarrying do not go to an abortion facility. They go to an emergency room,” said Operation Rescue President Troy Newman. “We are digging into this incident further and should know more about this suspicious incident soon.”

This is the second known medical emergency at this facility in 2018. On January 27, 2018, an ambulance was dispatched to the Cherry Hill Women’s Center for a woman suffering a “respiratory emergency.”

The Cherry Hill Women’s Center is part of a chain of five abortion facilities that operate in five states. The Cherry Hill, New Jersey, site conduct abortions through 24.6 weeks of pregnancy and perhaps much longer through their so-called “fetal anomaly” program.

The clinics are members of the National Abortion Federation, which is no ringing endorsement since NAF member facilities have been found to be among the worst in the nation when it comes to sanitation and patient safety. 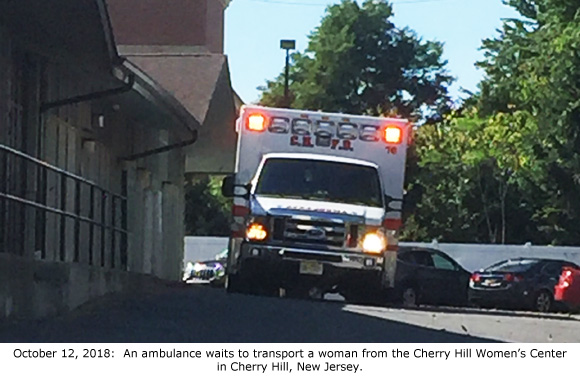 Abortionists known to work at the Cherry Hill Women’s Center are Adam L. Moises, David T. Broisman, and Richard M. Lieblich, who paid out $1.65 million in 2002 to settle a “wrongful birth” suit that involved a child born with severe disabilities resulting from a failed abortion.

Another abortionist at the Cherry Hill Women’s Center is Eric Yahav, who was recorded by his girlfriend in December 2015, as he attempted to force her out of their home and take her against her will to abort their baby. The girlfriend later fled to safety and obtained a protective order against Yahav. A complaint with the New Jersey Board of Medical Examiners was closed without action, despite the hair-raising evidence of domestic abuse that was submitted in that case.

“It is clear that this abortion facility poses a danger to women along with their babies. Unfortunately, right now, the law may not allow any penalty for killing pre-born babies, but there are penalties for hurting and maiming women,” said Newman. “Once we know more about the October 12 incident, we will consider filing a formal complaint against this facility.”