You are here: Home / Abortion911 / No Luck of the Irish for Planned Parenthood Patient Hospitalized on St. Patrick’s Day

Ann Arbor, MI – An ambulance was spotted by two pro-life activists on March 17, 2017, at the Planned Parenthood abortion facility in Ann Arbor, Michigan. The ambulance appears to have transported a patient.

Video shows an ambulance partially concealed behind bushes at the Planned Parenthood office. The pro-life supporter, who took the brief video was participating in a 40 Days for Life prayer vigil. She noted that she had tried to get post-abortion healing materials to the man who accompanied the patient, but unfortunately, he was not receptive.

Previous medical emergencies that took place at the Ann Arbor Planned Parenthood occurred on March 12, May 8, and June 26, 2015.

Operation Rescue has documented eight medical emergencies at Planned Parenthood abortion facilities nationwide in the opening weeks of 2017, but that number is far from comprehensive, and reflects the need for better abortion complication reporting laws in every state.

Please continue to contact your U.S. Congressman and Senators and urge them to defund Planned Parenthood. 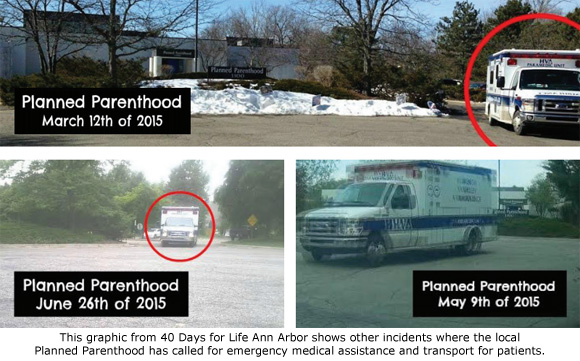