You are here: Home / Abortion911 / ‘Nothing Happened Here’ – Except Fatally Botched Abortion 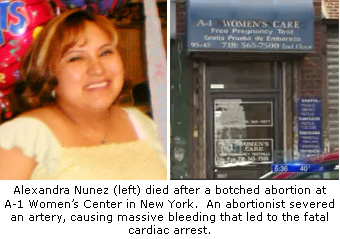 Police, who are continuing to investigate the death, said that the abortionist severed an artery during Nunez’s abortion, leading to massive bleeding and eventually cardiac arrest. Nunez was rushed to a nearby hospital where she died.

A-1 Women’s Center, located in a run-down building in a predominately Hispanic neighborhood of Jackson Heights.

An unidentified clinic worker told reporters that everything had “gone well” at the abortion clinic, which also doubles as a plastic surgery center. “Nothing happened here,” she said.

“Nothing happened there – except fatal injuries during a botched abortion which cost a woman her life,” said Operation Rescue President Troy Newman. “It is so typical of abortion clinics to hide the truth, but this time, the truth is out. The clinic is under investigation, and we will be forwarding information about this tragedy to the New York State Medical Board and demand disciplinary action against the abortionist.”