You are here: Home / Abortion911 / Panicked Woman Left Gasping for Air at Planned Parenthood While Staff Refused to Help

Baltimore, MD — A woman at a Planned Parenthood office, presumably for abortion drugs, suffered a serious anxiety attack and was forced to call 911 on her own for medical assistance because no one at Planned Parenthood would help her.

The 911 records show the incident took place on December 7, 2018, at the Planned Parenthood abortion facility located at 330 Howard Street in Baltimore.

While much of the recording and Computer Aided Dispatch Transcript which were supplied to Operation Rescue by Diane Levero of Defend Life, were redacted of medical information, much could still be learned about what happened to Planned Parenthood’s ailing patient.

The woman’s voice was so faint on the recording that it was difficult to make it out until the audio file was enhanced by Operation Rescue staff.

“I’m at Planned Parenthood. I’m having an anxiety attack. I need an ambulance,” the woman told the emergency dispatcher as she audibly gasped for air as she struggled to provide the address.

When later asked if she was doing alright, she responded, “No. I just…I don’t know, ma’am. I don’t feel well right now.”

The woman indicated that she had medication for anxiety in her car.

“It’s in my car but I can’t get to my car…I can’t drive right now…but nobody helps me.”

When asked again if there was anyone there who could help her, she responded, “No.”

Local pro-life activists report that a fire unit and ambulance arrived to care for the woman, who carried the typical green folder given to women who leave Planned Parenthood with abortion-inducing drugs. She was escorted by a medic into the ambulance where they stayed for about an hour until the woman was able to recover from the attack.

While this incident seems small compared to some medical emergencies involving lethal hemorrhages, perforated organs, and maternal deaths, it is a revealing example of the lack of compassion shown by Planned Parenthood’s staff, who just left this panicked woman gasping for air in their front lobby without trying to assist her.

Images below are courtesy of Defend Life and show scenes from the December 7, 2018, incident at Planned Parenthood in Baltimore. 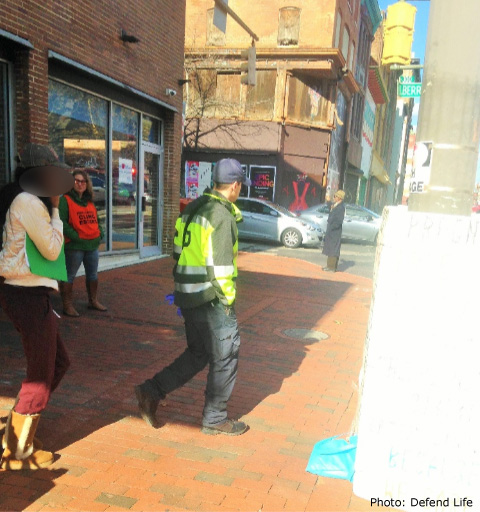 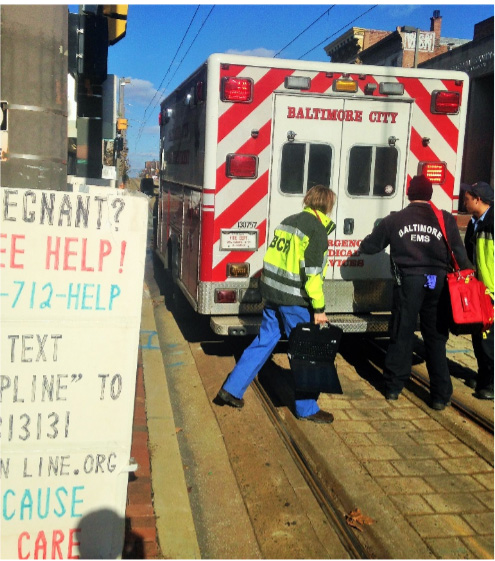