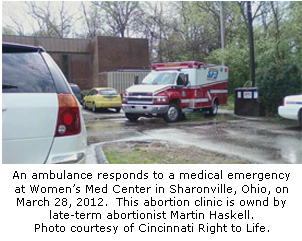 Cincinnati, OH — Operation Rescue has received word from Cincinnati Right to Life of an apparent abortion injury this morning at Women’s Med Center in Sharonville, Ohio, that caused a patient to be rushed to the hospital via ambulance.

“Today, 3/28/12, paramedics with ambulance and police were called to Haskell’s Abortion Clinic in Sharonville and this was witnessed by many. A young woman was seen being carried out on a stretcher by paramedics who were bagging the woman (giving life support). It is assumed that the woman suffered some kind of complication in the clinic while she was there for treatment. Police were also at the scene and closed down the clinic for a time.

The Medical community is aware of other documented emergency calls at various Haskell clinics over the years. There has been concern that perhaps medical care delivered to some of these women is unsafe.”

Haskell has no hospital privileges, but received a variance from the state to continue operations when two local physicians offered to provide emergency hospital care for his injured patients. One of those physicians, William T. Bowers II, was declared negligent by the State of Kentucky in January of 2011, and was ordered to cease the practice of obstetrics after the gross mismanagement of a wanted pregnancy resulted in a dead child. Bowers settled a claim with the parents for $250,000. Ohio reprimanded Bowers in October of last year and placed him on two years probation. He is under criminal investigation by the Attorney General’s office in Indiana.

“We are deeply concerned that women injured at Haskell’s Sharonville abortion mill are being placed in double jeopardy. The care they receive from Haskell’s associates at the hospital may not be any better than what they were subjected to at the abortion mill,” said Troy Newman, president of Operation Rescue and Pro-Life Nation.

“In light of today’s events, we are asking Gov. John Kasich to step in and put an end to Haskell’s dangerous abortion business. Ohio laws prevent the operation of abortionists without hospital privileges, and it is time that the variance is revoked and Haskell is held to the same safety standards as other physicians,” said Newman. “Pro-life groups like Cincinnati Right to Life and ours have long complained about the dangers of Haskell’s dubious emergency arrangements. We hope that a woman will not have to die before Ohio enforces their laws and puts Haskell out of business.”